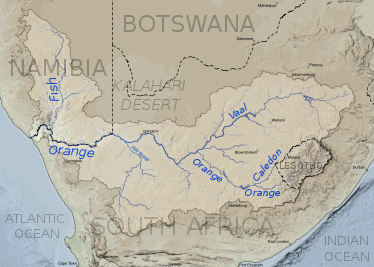 Basin of the Orange River 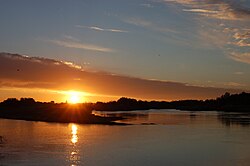 Sunset over the ǂNūǃarib near Upington in the Northern Cape.

The Orange River (officially called Oranje) is a river in Southern Africa. It is 2,160 kilometres (1,340 mi) long. It starts in Lesotho, and is the longest river there. For large parts of its course, it forms the border between South Africa and Namibia.

The Orange river basin extends into South Africa, Namibia, and Botswana. The river starts in the Drakensberg mountains. It passes only through the city of Upington: it does not run through other major cities.

The river is important for the South African economy. Its water is used for irrigation and hydroelectric power. The river was named the Orange River in honour of the Dutch ruling family, the House of Orange, by the Dutch explorer Robert Jacob Gordon.