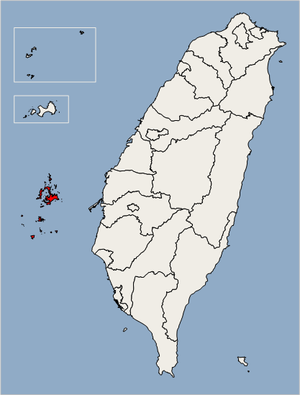 The Penghu Islands, also known as Pescadores (from Portuguese: "fishermen") are an archipelago off the western coast of Taiwan. They are in the Taiwan Strait. The Archipelago is made up of 90 small islands and islets. It covers an area of 141 square kilometres (54 sq mi).

The whole archipelago forms Penghu County under Taiwan Province in the Republic of China. The archipelago and the island of Taiwan together formed the former Japanese territory of Formosa.