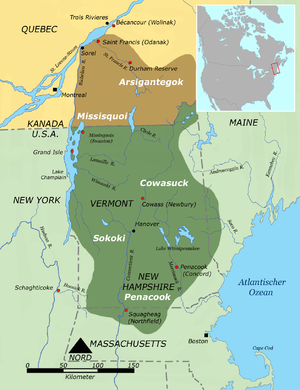 Pennacook territory shown within the larger area that the Western Abenaki lived in.

The Pennacook (or Pawtucket) were a Native American people in North America. They lived along the Merrimack River in New Hampshire and Massachusetts. They spoke an Algonquian language.

When the English colonists arrived, the Pennacook fled north with the Abenaki, or west with other tribes. Those that went west were hunted down and killed by colonists. Those that fled northward eventually merged with other displaced tribes from New England.