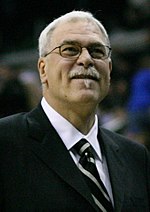 Phil Jackson (born September 17, 1945) is a coach in the NBA. He has won eleven championships as coach in the NBA, six with the Chicago Bulls and five with the Los Angeles Lakers. With his 10th championship, Phil Jackson surpassed Red Auerbach, who won 9 championships before 1966. As of March 4, 2010, Phil Jackson has the highest winning percentage in regular season games of any coach in NBA history who coached at least 500 games.[1] Before he was a coach, Jackson was a player for the New York Knicks and the New Jersey Nets. Jackson is from Montana.