The octagonal Baptistery in Pistoia

Pistoia is a city in the Tuscany region of Italy. It is the capital of the province of Pistoia. The city is about 30 kilometres (19 mi) west and north of Florence.

Pistoria, the old Latin name of Pistoia, was a Gallic, Ligurian and Etruscan city. After the city became a Roman colony in the 6th century BC, it was a place for activities or trades. Near the end of the 6th century, the city was captured by troops of the Lombardic king. The city did very well under the control of the Lombards. In 1177, Pistoia chose to become a free commune. In the following years, it became an important political centre. It built walls and several public and religious buildings.

In 1254 Pistoia was captured by troops from Florentine. Pistoia stayed a Florentine city except for few years in the 14th century, when Castruccio Castracani captured it for Lucca. It was annexed to (made a part of) Florence in 1530. During the 14th century Ormanno Tedici was one of the Lords of the city.

Dante mentioned the town in his Divina Commedia. Michelangelo called the people of Pistoia the "enemies of heaven". 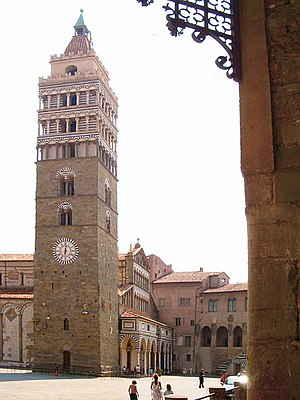 The Bell Tower of the Cathedral in Piazza Duomo. 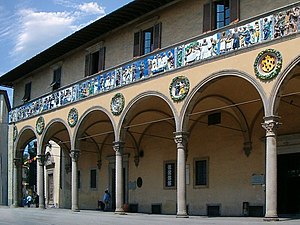 The large Piazza del Duomo is connected near to other famous buildings, for example the Palazzo del Comune and the Palazzo del Podestà. In July, the Giostra dell'Orso ("Bear Joust") takes place in the square. At the joust, horsemen try to strike a target held by a dummy shaped like a bear. The 14th century Baptistry, in Gothic style is also in the square.

Pistoia is twinned with: