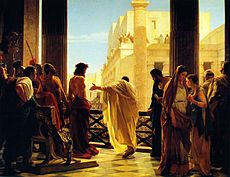 Ecce Homo ("Behold the Man"), Antonio Ciseri's depiction of Pontius Pilate showing a scourged Jesus to the people of Jerusalem.

Pontius Pilate [1] was the governor of the Roman province of Judaea from AD 26 until 36.

He was the sixth Procurator of Judaea. In modern times he is best known as the man who presided over the Trial of Jesus and ordered his crucifixion.

Pilate appears in all four canonical Christian Gospels. Mark, showing Jesus to be innocent of plotting against Rome, portrays Pilate as extremely reluctant to execute Jesus. The Jewish hierarchy was responsible for his death.[2] In Matthew, Pilate washes his hands of Jesus and reluctantly sends him to his death.[2] In Luke, Pilate not only agrees that Jesus did not conspire against Rome but King Herod also finds nothing treasonous in Jesus' actions.[2] In John, Jesus states: 'my kingdom is not of this world' when held by Pilate. (John 18:36)

Tacitus mentions in his Annales (15,44):[3] "Christus, from whom the name had its origin, suffered the extreme penalty during the reign of Tiberius at the hands of one of our procurators, Pontius Pilatus".[4]

Pilate's biographical details before and after his appointment to Judaea are unknown, but have been supplied by tradition, which include the detail that his wife's name was Procula (she is canonized as a saint in the Greek Orthodox Church).