Half sovereign minted in Sydney, Australia, 1914 features St. George and the dragon 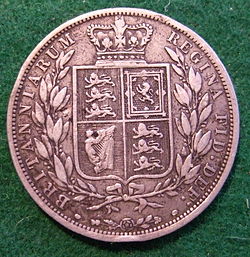 Queen Victoria half crown in silver. 1886 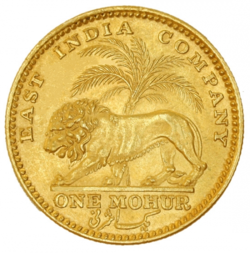 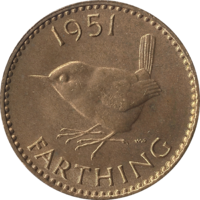 The pound sterling (GBP; £ or ₤), also called just the pound, is the official currency used in the United Kingdom. It is also used in British overseas territories, Isle of Man, Bailiwicks of Guernsey and Jersey. The pound is divided into 100 pence.

The Latin word for "pound" is libra. The £ or ₤ is a stylised writing of the letter L, a short way of writing libra. This is similar to how a pound of mass is abbreviated "lb". Up until around the 1970s, especially on typewriters or keyboards without a "£" symbol, it was common to write "L" instead of "£".

The symbols for shilling and penny came from Roman coins: "s" for shilling (from the Latin word solidus) and "d" for penny (from the Latin denarius). The penny was divided into 4 farthings. The farthing became obsolete (was no longer used) in 1961 because it was worth so little.

How prices were written and pronounced in the old system:

There was also a guinea. Originally the guinea was a gold coin. Although the coin had not been minted or circulated for a long time, prices were still sometimes given in guineas. A guinea was 21s (or £1 1s 0d). A price of 58 guineas was, in fact, £60 18s 0d, which sounds more than "58 guineas".

(Following the Great Recoinage of 1816)

(Following the Great Coinage of 1816)

In circulation before 1971 were the halfpenny, penny, threepence, sixpence, shilling, florin, crown, sovereign, ten shilling note, and the one, five, 10, 20 and 50 pound notes.

The crown and sovereign were legal currency before 1971. By then they were commemorative coins and not commonly found in circulation. They are both still legal currency at a value of 25 pence and £1 respectively.

In 1971, the pound sterling of the United Kingdom and the Irish Pound of Ireland were decimalised (divided into 100). Most coins were de-monetised. £1 was equal to 100 pence after then. One shilling became 5 pence, remaining 1⁄20 of £1. £1 stayed the same.