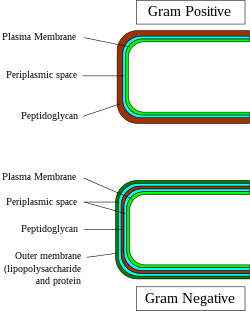 Gram-positive- and negative bacteria are chiefly differentiated by their cell wall structure.

The Proteobacteria are a major phylum of bacteria.[1]

They are Gram-negative bacteria. This means they do not retain the violet dye in the Gram staining protocol.[2]

In a Gram stain test, a counterstain (commonly safranin) is added after the crystal violet, colouring all Gram-negative bacteria with a pink colour.

The test itself is useful in classifying two distinct types of bacteria based on the structural differences of their cell walls.

Proteobacteria include a wide variety of pathogens, such as Escherichia coli, Salmonella, Vibrio, Helicobacter, and many other notable genera.[3]

Others are free-living, and include many of the bacteria responsible for nitrogen fixation. The group is defined primarily in terms of ribosomal RNA (rRNA) sequences.

Most members are facultatively or obligately anaerobic, chemoautotrophs, and heterotrophic, but there are numerous exceptions.

There are alphaproteobacteria in this phylum which are widely found in marine plankton. They may constitute over 10% of the open ocean microbial community.