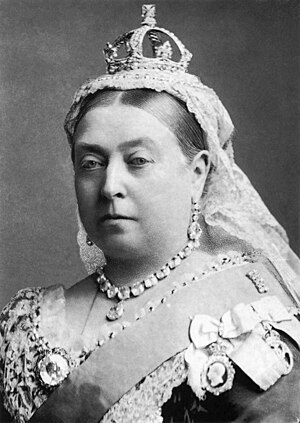 A queen is a woman who rules a country, because of inheritance. A queen usually comes to power after the death of the previous king or queen, who is her parent. A country that is ruled by a queen is called a kingdom – the same as a country ruled by a king.

The wife of a king is also called a queen. However, the husband of a queen is not always called a king. For example, the last King of Britain (George VI) had a wife (Elizabeth), who was called Queen Elizabeth. He had no sons, so he was followed by his elder daughter, who is also called Elizabeth. She became Queen Elizabeth II. She was married to The Duke of Edinburgh until his death on April 9, 2021; but when she became Queen he did not become King.

Many people who study government think a country should not have a monarchy. They argue that rulers ought to be elected, or that monarchs are often corrupt. Aristotle’s “Politics” compares the different forms of government which a state may have. He claims monarchy to be one of the worst regimes because one leader may be easily corrupted, even if they were selected as the most wise and deserving ruler of an entire group.

Many people in countries such as the UK want to keep their royal family as they have remained a traditional icon and source of income for the country. However, in the UK their influence in the rule of the country is very small, leaving government to the governing political party elected by the people. This is because in a constitutional monarchy the monarch has only the power of head of state.

A queen regnant is head of state, and has all the powers of a sovereign.

A queen regnant does not keep the title of queen if she abdicates (resigns). No queen has ever abdicated in the history of the United Kingdom, but three abdications have occurred in the Kingdom of the Netherlands:

A queen consort is the wife of a king. She is not the head of state, and does not have any powers unless they are given by the King or another law.

The last King of Britain (George VI) had a wife (Elizabeth) who was called Queen Elizabeth. He had no sons, so he was followed by his elder daughter. She is also called Elizabeth and became Queen Elizabeth II. She was married to the late Duke of Edinburgh; but when she became Queen he did not become King.

A queen dowager is the widow of a king.

A queen consort usually keeps the title of Queen after her husband's death, for example