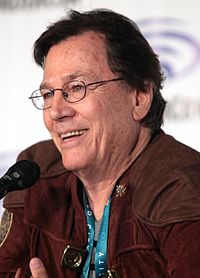 Richard Lawrence Hatch (May 21, 1945 – February 7, 2017) was an American actor, writer, and producer. He was best known for his role as Captain Apollo in the original Battlestar Galactica television series, and also as Tom Zarek in the 2003 remake of Battlestar Galactica.

Hatch was also known for his role as Philip Brent in All My Children and as Inspector Dan Robbins in The Streets of San Francisco.

Hatch was born in Santa Monica, California. He worked in Chicago, Illinois during his early stage career. Hatch died on February 7, 2017 from pancreatic cancer under hospice care in Los Angeles, aged 71.[1][2]

Help Improve This Page: Please contact us to become an approved KidzSearch editor and provide your credentials. Provide feedback on this article in our Richard Hatch Forum