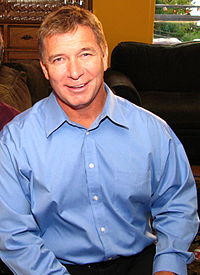 Rick Hansen, CC, OBC (born August 26, 1957 in Port Alberni, British Columbia) is a Canadian athlete and activist. He was paralyzed in an accident at the age of 15. Inspired by his friend Terry Fox, who tried to run across Canada after losing a leg to cancer, he set out on a trip to travel around the world, in his wheelchair; it was called the Man in Motion tour. The money he raised from that tour went to help spinal cord injury research and paraplegic sports. He still works and does charity to raise money & awareness. Hansen was one of the torchbearers during the 2010 Winter Olympics.