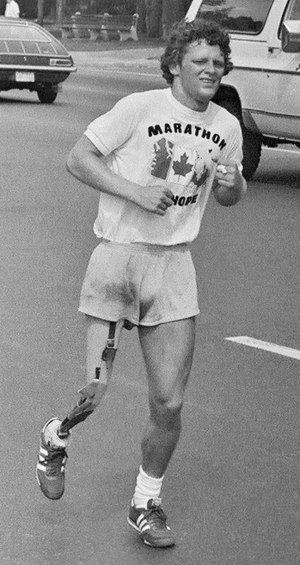 Fox when he was in Toronto during the Marathon of Hope

Terrance Stanley Fox (July 28, 1958 – June 28, 1981) was a Canadian athlete and activist. He moved to Surrey, British Columbia in 1966 and to Port Coquitlam, British Columbia in 1968. He lost one of his legs due to bone cancer when he was 18. He is best known for his run, called The Marathon of Hope, which began on April 12, 1980 in St. John's, Newfoundland, the purpose of the run was to run across Canada (with help of an artificial leg) about 42 kilometres (26 mi) (the length of the average marathon, or foot race) each day. He originally wanted to run until he got to Vancouver Island on the other end of Canada. The goal was to raise 1 million Canadian dollars and later one dollar for every person in Canada to help cancer research.

Many people supported and helped him during his run, and had a lot of faith in him, but on August 31, 1980, near the town of Thunder Bay, Ontario, Fox's cancer spread to his lungs. He had to stop running.

In Canada, he is considered a hero. People still hold runs for him.

Shortly before his death, he was made a Companion in the Order of Canada (the youngest person in the country to receive such an honor). In addition, there is a statue of him in Ottawa (Canada's capital city), near Parliament Hill. Several schools named after him and he has been featured on a Canadian $1 coin.