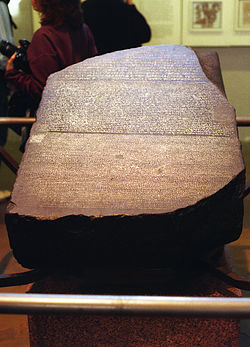 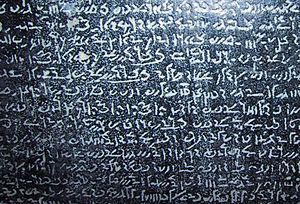 The Rosetta Stone. What exactly is it? The Rosetta stone is a stone with writing carved into it. There are 3 types of writing on the Rosetta stone; Greek, egyptian, and another form of egyptian writing. French soldiers found it in Egypt in 1799. It helped people get a better understanding of the Ancient Egyptian writing system called hieroglyphics. Its discovery led to the translation of Ancient Egyptian writing. The stone is named after the city where it was found, Rosetta. Today, that city is called "Rashid". The stone is now in the British Museum in London.

It had three pieces of writing on it that said the same thing in three different languages. One was in an Ancient Egyptian script called demotic, the local language of the people in Egypt at that time. The other two languages were hieroglyphics and Ancient Greek.

The historians could already read the Greek. Using this knowledge they were able to work out how to read the Egyptian scripts.

The complete Greek text, in English,[1] is about 1600–1700 words in length. The text is a royal decree from the Hellenistic period about the taxes of temple priests. It gives them back the tax privileges they had earlier. Some scholars believe that several copies of the Rosetta Stone might exist, as this proclamation must have been made at many temples.

The discovery of the stone

The soldiers who discovered the stone were part of Napoleon Bonaparte's 1798 campaign in Egypt. It was transferred to the British as part of the surrender arrangements when French forces were caught in Alexandria by the Battle of the Nile and a larger force of British and Ottoman troops. The surrender and treaty is called the Capitulation of Alexandria. Under the treaty, the French had to hand over their archaeological discoveries to the British, and that included the Rosetta Stone.[2]

Part of the text

These are some of the translated words on the stone:

In the reign of the new king who was Lord of the diadems, great in glory, the stabilizer of Egypt, and also pious in matters relating to the gods, superior to his adversaries, rectifier of the life of men, Lord of the thirty-year periods like Hephaestus the Great, King like the Sun, the Great King of the Upper and Lower Lands, offspring of the Parent-loving gods, whom Hephaestus has approved, to whom the Sun has given victory, living image of Zeus, Son of the Sun, Ptolemy the ever-living, beloved by Ptah;

THE DECREE: The high priests and prophets, and those who enter the inner shrine in order to robe the gods, and those who wear the hawk's wing, and the sacred scribes, and all the other priests who have assembled at Memphis before the king, from the various temples throughout the country, for the feast of his receiving the kingdom, even that of Ptolemy the ever-living, beloved by Ptah, the god Manifest and Gracious, which he received from his Father, being assembled in the temple in Memphis this day, declared:

Since King Ptolemy, the ever-living, beloved by Ptah, the god Manifest and Gracious, the son of King Ptolemy and Queen Arsinoë, the Parent-loving gods, has done many benefactions to the temples and to those who dwell in them, and also to all those subject to his rule, being from the beginning a god born of a god and a goddess—like Horus, the son of Isis and Osirus, who came to the help of his Father Osirus; being benevolently disposed toward the gods, has concentrated to the temples revenues both of silver and of grain, and has generously undergone many expenses in order to lead Egypt to prosperity and to establish the temples... the gods have rewarded him with health, victory, power, and all other good things, his sovereignty to continue to him and his children forever.[3]