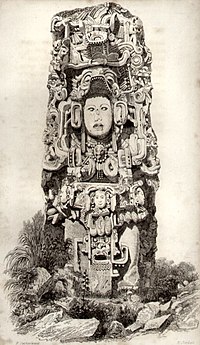 A stele[1] is a stone or wooden , mostly taller than it is wide, that is built so that people will remember something when they look at it. Mostly it is decorated with the names and titles of the person that shall remind of. This is , carved in relief or painted onto the slab.

Stelae were also used as territorial markers, as the boundary stelae of Akhenaten at Amarna,[2] or to commemorate military victories.[3] They were widely used in the Mesopotamia, Greece, Egypt, Ethiopia, and, quite independently, in China and some Buddhist cultures, and, more surely independently, by Mesoamerican civilisations, especially the Olmec[4] and Maya.[5] The huge number of stelae that survive from ancient Egypt and in Central America are one of the largest and most significant sources of information on those civilisations.

Unfinished standing stones, set up without inscriptions from Libya in North Africa to Scotland were monuments of pre-literate Megalithic cultures in the Late Stone Age.

An obelisk is a specialized kind of stele. The Celtic high crosses of Ireland, Scotland, and Wales are specialized stelae. Likewise, the totem pole of North and South America is a type of stelae. Gravestones are also kinds of stelae.

In 2004 the architect Peter Eisenman created a field of some 2,700 blank stelae, the Memorial to the Murdered Jews of Europe in Berlin[6] to memory of the Holocaust.