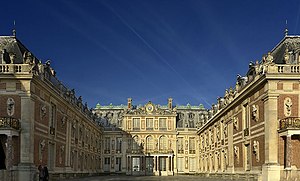 Versailles, near Paris, where the French kings held court. The courtyard at the front of the building is opened up (not entered through an archway). This style became popular throughout Europe.

A royal court or noble court is a place where an important ruler such as a king, prince or duke live. The building is often called a palace, but the “royal court” means not just the buildings but all the royal household (all the people who live and work there.)

It is called a court because in early times the palace would have a court (an enclosed space) at the front.

In history there were great rulers who held important courts, e.g. Charlemagne.

A famous example is Hampton Court on the river Thames in London where Henry VIII had his court. Today the Queen holds court at Buckingham Palace.

People who work at court are “court officials”.