Sagami Province (相模国, Sagami no kuni ?) was an old province of Japan in the area of central and western Kanagawa Prefecture.[1] It was sometimes called Sōshū (相州?).

The ancient capital city of the province was near Hiratsuka. 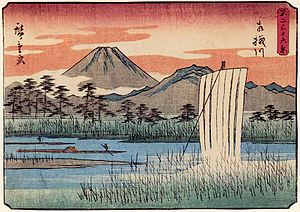 Sagami was one of the original provinces of Japan established in the Nara period under the Taihō Code.

In the Edo period, the Tōkaidō road was the main route between Kyoto and Edo. The road passed through Sagami.[2]

In the Meiji period, the provinces of Japan were converted into prefectures. The maps of Japan and Izu Province were reformed in the 1870s.[3]

All of Sagami became part of the new Kanagawa Prefecture in 1876.[1]

In 1906, the Imperial Japanese Navy battleship Sagami was named after the province.[4]

Samukawa jinja was the chief Shinto shrine (ichinomiya) of Hōki. [5]