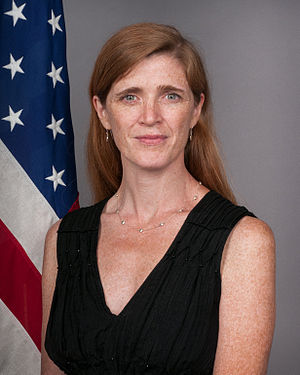 Samantha Power (born September 21, 1970 in Dublin, Ireland) is an Irish-born American academic and diplomat. She was the United States Ambassador to the United Nations. She was a senior adviser to Barack Obama. She ended that job in March 2008. She is listed as the 63rd most powerful woman in the world by Forbes.[1]

Power was born in Ireland. She moved to Pittsburgh when she was nine. She graduated from Yale University in 1992.[2]

Her book, A Problem From Hell, which won the 2003 Pulitzer Prize in Nonfiction, examines the role and responses of the United States government in the genocides and ethnic conflicts of the 20th Century.