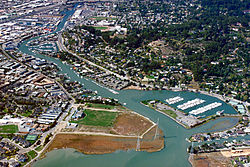 San Rafael (/ˌsæn rəˈfɛl/ SAN-rə-FE-el; Spanish pronunciation: [san rafaˈel] "Saint Raphael") is a city in and the county seat of Marin County, California, United States. The city is in the North Bay region of the San Francisco Bay Area. As of the 2010 census the city's population is 57,713. 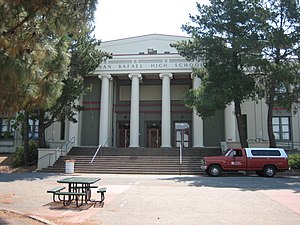 San Rafael High School is believed to be the start of the term "420".

The term "420" when used in reference to cannabis consumption is believed to have started in San Rafael, specifically, at San Rafael High School. Since then, use of "420" has spread throughout the rest of the United States, and much of the rest of the world, in reference to cannabis consumption on April 20 or at 4:20 p.m., the time the original group gathered after school.[1]

San Rafael has a Mediterranean climate (Csb in the Köppen climate classification).