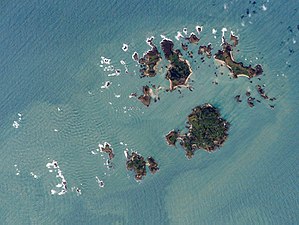 An aerial photo of the Isles of Scilly

St Martin's, taken from the helicopter to Penzance 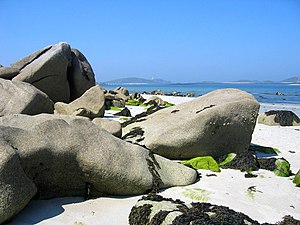 View from Tresco, the second largest of the islands 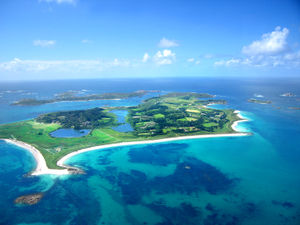 Looking across Tresco, one of the 5 inhabited islands of the Isles of Scilly 45km from the coast of Cornwall in the United Kingdom

The Isles of Scilly form an archipelago off the southwestern tip of the Cornish peninsula of Great Britain.

The islands are designated an 'Area of Outstanding Natural Beauty'. They have been dangerous for ships, and there are 530 known shipwrecks around the archipelago.[1]

Scilly has been inhabited since the Neolithic. Its history has been one of subsistence living until the early 20th century (people lived from what they could get from the land or the sea). Farming and fishing continue today, but the main industry now is tourism.

It is likely that until relatively recent times the Isles were much larger with many of them joined into one island, named Ennor. Rising sea levels flooded the central plain around 400–500 AD, forming the current islands.[2]

Offshore, midway between Land's End and the Isles of Scilly, is the supposed location of the mythical lost land of Lyonesse, referred to in Arthurian literature.

Scilly has been identified as the place of exile of two heretical 4th century bishops, Instantius and Tiberianus, who were followers of Priscillian.[5] 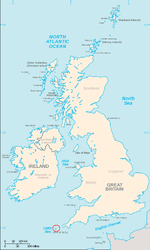 Position of the Isles of Scilly (circled)

The Isles of Scilly form an archipelago of five populated islands and many other small rocky islets (around 140 in total) lying 45 km (28 mi) off Land's End. They are all composed of granite of early Permian age.

The position of the islands causes great contrasts. The warming effect of the sea means they rarely have frost or snow. This allows local farmers to grow flowers earlier than would grow on mainland Britain. The chief agricultural product is cut flowers, mostly daffodils.

Exposure to Atlantic winds means that spectacular winter gales lash the islands from time to time. This is reflected in the landscape. On Tresco, the lush sub-tropical Tresco Abbey Gardens shelter on the southern end of the island, but the low heather and bare rock get the wind on the exposed northern end.