Sealand is a self-claimed country in the North Sea, but it is not an island. A structure called Roughs Tower was built in the sea by the British Royal Navy, and later became Sealand. It is very small. There is only room for 10 people on it. Even though a man named Michael Bates says Sealand is a country, not all countries agree with him. Once some people from The Netherlands went to Sealand to take it over. Michael Bates did not want this to happen, so he used helicopters and fought them to get it back. He won, and put some of those people in jail until he was pressured to let them go by other countries. If a boat goes too near Sealand, people from Sealand might fire guns at the boat. Even though Michael Bates says he is the prince of Sealand, it is very small so he usually is not there. Other people stay there to take care of Sealand. Sealand has its own stamps, national anthem, money, flag, and more things just like a real country. Bates' reasons why Sealand should be a real country are these: Sealand is out in the ocean, and when Sealand was created no country owned the ocean. Also, people asked Michael Bates to let his prisoners from The Netherlands go. Bates said that if they thought Sealand was not a country, they would not ask him to do that.

The owners claim that Sealand is an independent sovereign state because in 1968 an English court decided that Roughs Tower was in international waters and outside the jurisdiction of the British courts.[8] 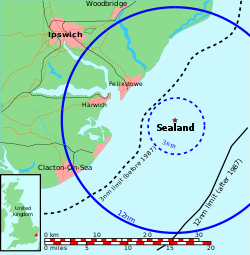 Map of Sealand and the United Kingdom, with territorial water claims of 3 NM and 12 NM shown.

In international law, the two most common rules of statehood are the constitutive and declaratory theories of state creation. In the constitutive theory, a state exists by recognition by other states. The theory splits on whether this recognition requires "diplomatic recognition" or just "recognition of existence". No other state grants Sealand official recognition, but it has been argued by Bates that negotiations carried out by Germany constituted "recognition of existence". In the declaratory theory of statehood, an entity becomes a state as soon as it meets the minimal criteria for statehood. Therefore recognition by other states is purely "declaratory".[9] In 1987, the UK extended its territorial waters from three to twelve miles. Sealand now sits inside waters that Britain claims as its territory.[10]

Irrespective of its legal status, Sealand is managed by the Bates family as if it were a recognised sovereign entity, and they are its hereditary royal rulers. Roy Bates styles himself "Prince Roy" and his wife "Princess Joan". Their son is known as "His Royal Highness Prince Michael" and has been referred to as the "Prince Regent" by the Bates family since 1999.[11] In this role, he apparently serves as Sealand's acting "Head of State" and also its "Head of Government".[12] At a micronations conference hosted by the University of Sunderland in 2004, Sealand was represented by Michael Bates' son James, who was referred to as "Prince Royal James."[13] The facility is now occupied by one or more caretakers representing Michael Bates, who himself resides in Essex, England.[11] Sealand's constitution was instituted in 1974. It consists of a preamble and seven articles. The preamble asserts Sealand's independence, while the articles variously deal with Sealand's status as a constitutional monarchy, the empowerment of government bureaus, the role of an appointed, advisory senate, the functions of an appointed, advisory legal tribunal, a proscription against the bearing of arms except by members of a designated "Sealand Guard", the exclusive right of the sovereign to formulate foreign policy and alter the constitution, and the hereditary patrilinear succession of the monarchy.[14] Sealand's legal system is claimed to follow British common law, and statutes take the form of decrees enacted by the sovereign.[15] Sealand has issued passports and has operated as a flag of convenience state, and it also holds the Guinness World Record for "the smallest area to lay claim to nation status".[16] Sealand's motto is E Mare Libertas (English: From the Sea, Freedom).[17] It appears on Sealandic items, such as stamps, passports, and coins, and is the title of the Sealandic anthem. The anthem was composed by Londoner Basil Simonenko;[18] it does not have lyrics.

At the beginning of 2007, the Bates put an ad in the newspaper. They would like to sell Sealand for 65 million pounds. [19][20] National motto: E mare libertas
(Latin: From the sea, freedom) 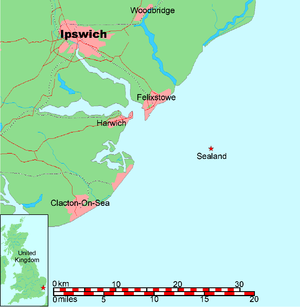 A location map with Sealand being marked