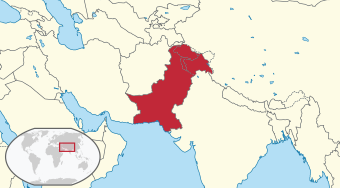 Pakistan was established in 1947 as a state for Muslims of colonial India. The driving force behind the movement for Pakistan was the educated Muslim in the Muslim minority states of United Province and Bombay Presidency, those of the Muslim majority areas such as Punjab region, Sindh or Bengal, parts of which eventually formed Pakistan were less enthusiastic and joined the cause of Pakistan in the last years before independence and partition. Its formation was based on the basis of Islamic nationalism. However, due to rampant corruption within the ranks of the government and bureaucracy, economic inequality between the country's two wings caused mainly by a lack of representative government and the government's indifference to the efforts of fierce ethno-nationalistic politicians like Mujeeb-ur-Rehman, colonial East Bengal (Eastern Pakistan) Civil war of and Partition of Pakistan the Bhola cyclone and the 1970 elections were the major factors, resulting in the formation of a new linguistic state of the People's Republic of Bangladesh.

Other parties, tribes and states