Shaanxi (Chinese:陕西, also sometimes called Shenshi) is a province in east China. The word "Shaan" (viz Shanzhou) is a place in Henan Province. "Xi" means "west". So "Shaanxi" means "the place to the west of Shaan".

The river Wei He runs across it. It has a large population of more than 30 million people. The capital of Shaanxi is Xi'an. It abbreviates as Shan (陕) or Qin (秦), also known as SanQin (三秦, meaning Three Qins).

January 23, 1556 – A massive earthquake, measuring 9.0 on the Richter scale, strikes Shaanxi, killing over 850,000 people. This is the most devastating earthquake in recorded history. 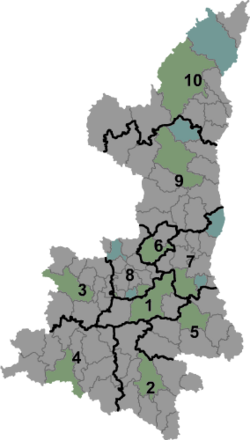 The map of Shanxi Province