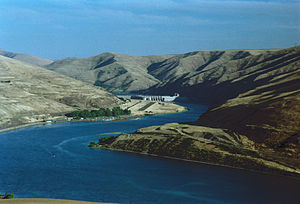 The Shoshone and Nez Perce Indians lived on the Snake River. The Lewis and Clark Expedition was the first American expedition to sight the Snake River. The river later was part of the Oregon Trail. Many pioneers traveled down the river to settle in the fertile Willamette Valley in Oregon.

There are fifteen dams on the Snake River. Some are for hydropower, some for irrigation, and some for navigation.