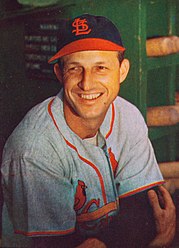 Stanley Frank "Stan" Musial (born Stanisław Franciszek Musiał; November 21, 1920 – January 19, 2013) or Stan the Man was an American professional baseball player who played 22 seasons in Major League Baseball (MLB) for the St. Louis Cardinals (1941–1963). He is the National League's all-time leader in doubles, among many other records for doubles.

President Barack Obama presented Musial with Presidential Medal of Freedom, the highest honor that can be given to a civilian, at the White House on February 15, 2011.[1][2] Musial was a first-ballot inductee to the Baseball Hall of Fame in 1969. He began to play baseball in 1941 until his retirement in 1963.

Musial was born on November 21, 1920 in Donora, Pennsylvania.[3] He had Czech and Polish parents. He studied at the University of Pittsburgh.

Musial was married to the former Lillian Labash from 1940 until her death in May 2012. They had four children. Musial died on January 19, 2013 in the St. Louis suburb of Ladue, Missouri from natural causes, aged 92.[4] He died on the same day as Earl Weaver.