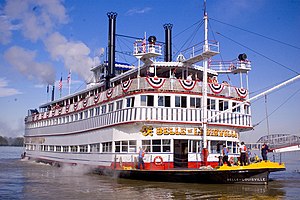 The Belle of Louisville, an old steamboat that was first called the Idlewild and later called the Avalon

model of the first steamer, built by Jouffroy d'Albans

The Stettin is an icebreaker which is active in the port of Hamburg today. The photo shows the ship in Kiel,

A steamboat (also called a steamship or steamer) is a ship that uses a steam engine or steam turbine to move. At first, these were paddle steamboats. Some had a paddle wheel on the back. Others had two wheels on the sides. Most went down rivers. From about 1836, marine propellers, invented by Josef Ressel, were used. Claude François Jouffroy d’Abbans built the first working steamship in 1783.

There were many steamboats in the 19th century in the United States and other countries. However, the first steamboat was built by John Fitch in 1787. It had many paddles.[1] Fitch tried to make money from the steamboat, but could not do so. He died in 1798, and did not live long enough to see Robert Fulton become the first person to build a steamboat that could make money. In 1807, Fulton built a steamboat that could travel from New York City to Albany in 32 hours.[2] Steamboats became much faster later in the 19th century.[3]