Surface tension is an effect where the surface of a liquid is strong. The surface can hold up a weight, and the surface of a water droplet holds the droplet together, in a ball shape. Some small things can float on a surface because of surface tension, even though they normally could not float. Some insects (e.g. water striders) can run on the surface of water because of this. This property is caused by the molecules in the liquid being attracted to each other (cohesion), and is responsible for many of the behaviors of liquids.

Surface tension has the dimension of force per unit length, or of energy per unit area. The two are equivalent—but when referring to energy per unit of area, people use the term surface energy—which is a more general term in the sense that it applies also to solids and not just liquids.

In materials science, surface tension is used for either surface stress or surface free energy. 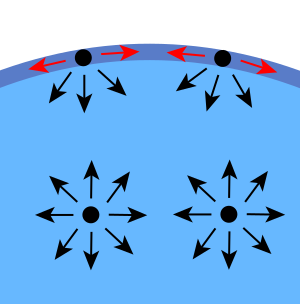 Diagram of the forces on molecules in liquid 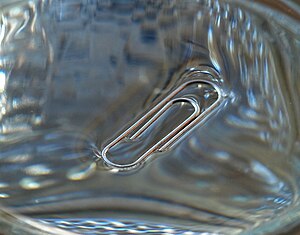 The cohesive forces among the liquid molecules cause surface tension. In the bulk of the liquid, each molecule is pulled equally in every direction by neighboring liquid molecules, resulting in a net force of zero. The molecules at the surface do not have other molecules on all sides of them and therefore are pulled inwards. This creates some internal pressure and forces liquid surfaces to contract to the minimal area.

Surface tension is responsible for the shape of liquid droplets. Although easily deformed, droplets of water tend to be pulled into a spherical shape by the cohesive forces of the surface layer. In the absence of other forces, including gravity, drops of virtually all liquids would be perfectly spherical. The spherical shape minimizes the necessary "wall tension" of the surface layer according to Laplace's law.

A. Rain water forms beads on the surface of a waxy surface, such as a leaf. Water adheres weakly to wax and strongly to itself, so water clusters into drops. Surface tension gives them their near-spherical shape, because a sphere has the smallest possible surface area to volume ratio.

C. Objects denser than water still float when the object is nonwettable and its weight is small enough to be borne by the forces arising from surface tension.[1] For example, water striders use surface tension to walk on the surface of a pond. The surface of the water behaves like an elastic film: the insect's feet cause indentations in the water's surface, increasing its surface area.[3]

D. Separation of oil and water (in this case, water and liquid wax) is caused by a tension in the surface between dissimilar liquids. This type of surface tension is called "interface tension", but its physics are the same.

E. Tears of wine is the formation of drops and rivulets on the side of a glass containing an alcoholic beverage. Its cause is a complex interaction between the differing surface tensions of water and ethanol. It is induced by a combination of surface tension modification of water by ethanol together with ethanol evaporating faster than water.

Surface tension is visible in other common phenomena, especially when surfactants are used to decrease it: 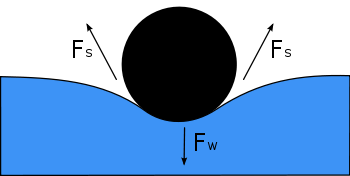 Diagram shows, in cross-section, a needle floating on the surface of water. Its weight, Fw, depresses the surface, and is balanced by the surface tension forces on either side, Fs, which are each parallel to the water's surface at the points where it contacts the needle. Notice that the horizontal components of the two Fs arrows point in opposite directions, so they cancel each other, but the vertical components point in the same direction and therefore add up[1] to balance Fw.

Surface tension, represented by the symbol γ is defined as the force along a line of unit length, where the force is parallel to the surface but perpendicular to the line. One way to picture this is to imagine a flat soap film bounded on one side by a taut thread of length, L. The thread will be pulled toward the interior of the film by a force equal to 2[math]\scriptstyle\gamma[/math]L (the factor of 2 is because the soap film has two sides, hence two surfaces).[4] Surface tension is therefore measured in forces per unit length. Its SI unit is newton per meter but the cgs unit of dyne per cm is also used.[5] One dyn/cm corresponds to 0.001 N/m.

An equivalent definition, one that is useful in thermodynamics, is work done per unit area. As such, in order to increase the surface area of a mass of liquid by an amount, δA, a quantity of work, [math]\scriptstyle\gamma[/math]δA, is needed.[4] This work is stored as potential energy. Consequently surface tension can be also measured in SI system as joules per square meter and in the cgs system as ergs per cm2. Since mechanical systems try to find a state of minimum potential energy, a free droplet of liquid naturally assumes a spherical shape, which has the minimum surface area for a given volume.

The equivalence of measurement of energy per unit area to force per unit length can be proven by dimensional analysis.[4]

Surface tension forces acting on a tiny (differential) patch of surface. δθx and δθy indicate the amount of bend over the dimensions of the patch. Balancing the tension forces with pressure leads to the Young–Laplace equation

If no force acts normal to a tensioned surface, the surface must remain flat. But if the pressure on one side of the surface differs from pressure on the other side, the pressure difference times surface area results in a normal force. In order for the surface tension forces to cancel the force due to pressure, the surface must be curved. The diagram shows how surface curvature of a tiny patch of surface leads to a net component of surface tension forces acting normal to the center of the patch. When all the forces are balanced, the resulting equation is known as the Young–Laplace equation:[6]

The quantity in parentheses on the right hand side is in fact (twice) the mean curvature of the surface (depending on normalization).

Solutions to this equation determine the shape of water drops, puddles, menisci, soap bubbles, and all other shapes determined by surface tension. (Another example is the shape of the impressions that a water strider's feet make on the surface of a pond).

The table below shows how the internal pressure of a water droplet increases with decreasing radius. For not very small drops the effect is subtle, but the pressure difference becomes enormous when the drop sizes approach the molecular size. (In the limit of a single molecule the concept becomes meaningless.) 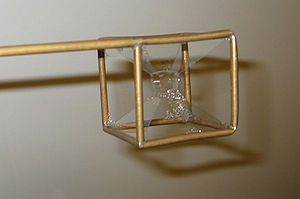 It is hard to find the shape of the minimal surface bounded by some arbitrary shaped frame using just mathematics. Yet by fashioning the frame out of wire and dipping it in soap-solution, a locally minimal surface will appear in the resulting soap-film within seconds.[4][7]

Since the forces are in direct proportion to their respective surface tensions, we also have:[6]

This same relationship exists in the diagram on the right. But in this case we see that because the contact angle is less than 90°, the liquid-solid/solid-air surface tension difference must be negative:

Observe that in the special case of a water-silver interface where the contact angle is equal to 90°, the liquid-solid/solid-air surface tension difference is exactly zero. 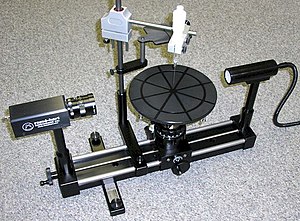 Surface tension can be measured using the pendant drop method on a goniometer.

Because surface tension manifests itself in various effects, it offers a number of paths to its measurement. Which method is optimal depends upon the nature of the liquid being measured, the conditions under which its tension is to be measured, and the stability of its surface when it is deformed.

Liquid in a vertical tube

Diagram of a mercury barometer

An old style mercury barometer consists of a vertical glass tube about 1 cm in diameter partially filled with mercury, and with a vacuum (called Torricelli's vacuum) in the unfilled volume (see diagram to the right). Notice that the mercury level at the center of the tube is higher than at the edges, making the upper surface of the mercury dome-shaped. The center of mass of the entire column of mercury would be slightly lower if the top surface of the mercury were flat over the entire crossection of the tube. But the dome-shaped top gives slightly less surface area to the entire mass of mercury. Again the two effects combine to minimize the total potential energy. Such a surface shape is known as a convex meniscus. 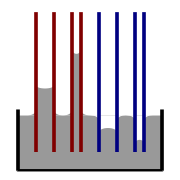 If a tube is sufficiently narrow and the liquid adhesion to its walls is sufficiently strong, surface tension can draw liquid up the tube in a phenomenon known as capillary action. The height the column is lifted to is given by:[4]

Puddles on a surface 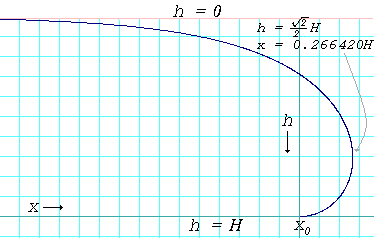 Small puddles of water on a smooth clean surface have perceptible thickness.

Pouring mercury onto a horizontal flat sheet of glass results in a puddle that has a perceptible thickness. The puddle will spread out only to the point where it is a little under half a centimeter thick, and no thinner. Again this is due to the action of mercury's strong surface tension. The liquid mass flattens out because that brings as much of the mercury to as low a level as possible, but the surface tension, at the same time, is acting to reduce the total surface area. The result is the compromise of a puddle of a nearly fixed thickness.

The same surface tension demonstration can be done with water, lime water or even saline, but only if the liquid does not adhere to the flat surface material. Wax is such a substance. Water poured onto a smooth, flat, horizontal wax surface, say a waxed sheet of glass, will behave similarly to the mercury poured onto glass.

The thickness of a puddle of liquid on a surface whose contact angle is 180° is given by:[6]

The formula also predicts that when the contact angle is 0°, the liquid will spread out into a micro-thin layer over the surface. Such a surface is said to be fully wettable by the liquid.

The breakup of streams into drops 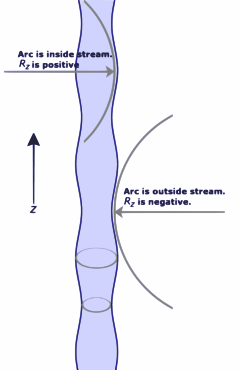 In day-to-day life we all observe that a stream of water emerging from a faucet will break up into droplets, no matter how smoothly the stream is emitted from the faucet. This is due to a phenomenon called the Plateau–Rayleigh instability,[6] which is entirely a consequence of the effects of surface tension.

The explanation of this instability begins with the existence of tiny perturbations in the stream. These are always present, no matter how smooth the stream is. If the perturbations are resolved into sinusoidal components, we find that some components grow with time while others decay with time. Among those that grow with time, some grow at faster rates than others. Whether a component decays or grows, and how fast it grows is entirely a function of its wave number (a measure of how many peaks and troughs per centimeter) and the radii of the original cylindrical stream.