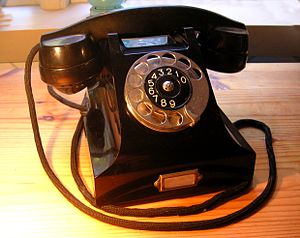 A telephone, also known as a phone, is a communication tool. Originally it was an electric tool transmitting analogue speech along wires. Now it is an electronic tool sending digital signals on wires or radio transmission. Using a telephone, two people who are in different places can talk to each other. Early telephones needed to be connected with wires which are called fixed or landline telephones. Modern mobile phones use radio waves.

Alexander Graham Bell was the first person to patent the telephone, in 1876.[1] Early telephones were wired directly to each other and could only talk to the phone that they were connected to. Later, telephone exchanges allowed connecting to other telephones. During the 20th century the machines that made the connections were automated.

There are many different types of telephone. A telephone that can be carried around is called a mobile phone or cell phone. These became popular in the late 1980s. It has become common for people to carry mobile phones and in some places it is unusual to not have one. The majority are smartphones, which can be used as computers. Some mobile phones are able to make telephone calls using communications satellites instead of masts on the ground, which means people can make calls from anywhere in the world.

In most countries there are public payphones. To use one, people pay with coins, a credit card or a prepaid card.

Computers can use a machine called a modem or a Digital subscriber line router to talk to other computers over a telephone line. This allows a computer to connect to other computer networks including the Internet.