The Dream of Gerontius

Manuscript score, signed by Elgar and the performers of the first performance

The Dream of Gerontius is a large musical work for choir, three solo singers and orchestra composed by Edward Elgar. It was composed and first performed in 1900. It is an oratorio, although Elgar did not like it being called an “oratorio”, but this is how it is usually described. It is usually thought of as the best choral work Elgar ever wrote.

The words are from a poem by John Henry Newman. They are supposed to be the words of a man called Gerontius who is dying. He imagines what is going to happen to him when he dies: how he will meet God who will judge whether he has been good enough to go to heaven. The angel speaks to him in the poem. There is also a priest, and a short solo for the Angel of Agony. The work is in two parts. Part I is about 40 minutes long and Part II lasts about an hour.

The work was composed for the Birmingham Music Festival of 1900 and the first performance took place on 3 October 1900, in Birmingham Town Hall. There were problems at the first performance: the chorus master died while the work was being learned. Some of the music sounded strange to the choir who found it very difficult. The soloists were not very good, and it was difficult for the conductor, Hans Richter (who was an excellent conductor) to stop the choir from singing out of tune. Richter had not had time to prepare the work properly: he was only given the full score on the day before the first rehearsal. The next year the work was performed in Germany where it was well received.

Another reason why it was slow to become popular in England was that the ideas in the poem were from the Roman Catholic teaching (John Henry Newman was a Roman Catholic Cardinal). This meant that a lot of Anglican cathedrals did not want it to be performed, so changes were made to the text. This new version was used for performances at the Three Choirs Festival until 1910. It quickly became popular in England. It was performed in Chicago and New York in 1903, and then in many other cities.

A few years earlier it had been suggested to the Birmingham Festival that Antonín Dvořák should be commissioned to compose a work on “The Dream of Gerontius”. They decided that the work was “too catholic”.[1]

The story of the poem 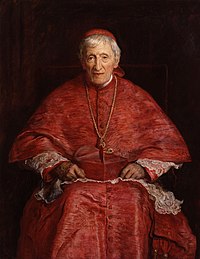 Cardinal Newman, author of the poem set by Elgar

Newman's poem tells the story of a soul's journey through death. It is thinking about the unseen world of Roman Catholic theology. The name Gerontius comes from the Greek word geron, "old man". The name "Gerontius" is not sung in the work, and not everyone agrees on how it is pronounced. The Greek "geron" has a hard 'g' (like in “grass”), but English words that come from it often have a soft 'g', as in "geriatriac". Elgar did not use all the words of Newman’s poem. He leaves out a lot of the meditations in Part 2 which would otherwise have made it very long.

In the first part, we hear Gerontius who is very faithful to God. Sometimes he is frightened but at other times he is hopeful. A group of friends (also called "assistants" in the text) joins him in prayer and meditation. He passes in peace, and a priest, with the assistants, say farewell as he sets off on his journey. In the second part, Gerontius, now called "The Soul", wakes up in a place apparently without space or time, and becomes aware that his guardian angel is there. She is happy that her task (bringing Gerontius to God) is done (the angel in Newman’s poem is male, but Elgar makes the angel female, giving the part to a female singer). They have a long conversation after which they journey to the throne of judgement. They have to pass the demons. They meet a choir of angels who are praising god. The Angel of the Agony pleads with Jesus to spare the souls of the faithful. Finally Gerontius briefly sees God and is judged in a single moment. The Guardian Angel lowers Gerontius into the soothing lake of Purgatory, gives him a final blessing and promises him he will wake up in glory.

Elgar scored the work for a large orchestra which includes, besides the usual instruments, piccolo, cor anglais, contrabassoon, harp and organ.

The work as an oratorio

Although people usually describe it as an oratorio, it is not an oratorio in the traditional sense: there are no breaks in the music (except between the two parts), and it does not tell a story from the Bible.

The music is written in a late Romantic style which is clearly inspired by Wagner, especially by his opera Parsifal. The opening of “The Dream of Gerontius” is a long orchestral introduction which uses themes that are going to be important in the work. The music of the character Gerontius is sometimes in speech rhythm (similar to recitative) but often very lyrical. Elgar moves quickly from one style to the other. The chorus provide a wonderful reflection on what is happening. The chorus of angels singing “Praise to the Holiest in the Height” is particularly beautiful. The chorus of demons is very difficult to sing.