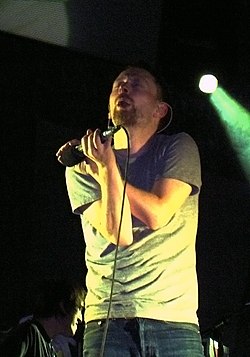 Thomas "Thom" Edward Yorke (born 7 October 1968) is an English musician. He is most known for being the lead singer, pianist, and guitarist for the English alternative rock band Radiohead. Radiohead have released nine studio albums. Radiohead first became famous with their single "Creep". In 1997 they released their third album, OK Computer. It got good reviews. It won Best Alternative Music Performance at the 1998 Grammy Awards.

He released his first solo album "The Eraser" in 2006 on XL Recordings. The album was nominated for a Grammy Award for Best Alternative Music Album in 2007. In 2008 Yorke sung on the single "Náttúra" by Björk.

In 2013 he released an album with Atoms for Peace called Amok.

Yorke lives in Oxford with his partner Rachel. They have two children, son Noah, born in 2001, and daughter Agnes, born 2004.