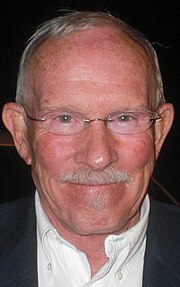 Tom Smothers (born Thomas Bolyn Smothers III on February 2, 1937)[1] is an American comedian, composer and musician, best known as half of the musical comedy team The Smothers Brothers, alongside his younger brother Dick.

Smothers was born on February 2, 1937 in New York City, New York.[2] He studied at Redondo Union High School and at San José State University. He was married two times. His current marriage is to Marcy Carriker. He has two children with Carriker and one from his last marriage. He now lives in Sonoma County, California.

Help Improve This Page: Please contact us to become an approved KidzSearch editor and provide your credentials. Provide feedback on this article in our Tom Smothers Forum