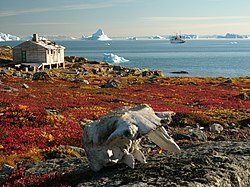 In physical geography, tundra is where the tree growth is hindered by low temperatures and short growing seasons. The term "tundra" comes from tūndâr which means 'uplands, tundra, treeless mountains.

There are three types of tundra: Arctic tundra, Antarctic tundra, and alpine tundra. In all of these types, the plants are mostly grass, moss, and lichens. Trees grow in some of the tundra. The boundary between the tundra and the forest is known as the tree line or timberline.The area itself encircles the Arctic Ocean of the Northern Hemisphere. The climate in a tundra biome consists of freezing cold and dryness in the winter and cold summers. The tundra ground is a barren place, often covered with rocks.

Most water on the tundra is frozen within the soil. The permanent frozen soil is called permafrost. Permafrost and fierce winds prevent large trees from growing deep roots. Plants in the tundra are small and grow close to the ground. Plants called cushions grow in tight clumps in the tundra, but lichens are the dominant plants. Lichens cover the rocks. The few trees that do grow on the tundra are dwarf willows and birch.

The deep and cold snow makes life in the tundra very difficult. Every animal must adapt in order to survive. Some have thick fur that turns white during the winter. Others find places to hibernate during the winter months. Some examples of animals that live in the tundra are: rodents, hares, sables, caribou, wolves, arctic foxes, bears, walruses, seals, and snowy owls.[1]