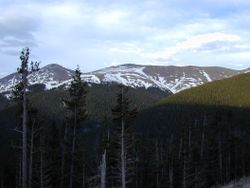 In this view of an alpine tree-line, the distant line looks particularly sharp. The foreground shows the transition from trees to no trees. These trees are stunted and one-sided because of cold and winds.

The tree-line or timberline is the edge of the habitat at which trees can grow. Beyond the tree-line, they are unable to grow as conditions are too bad.

There are several types of tree lines defined in ecology and geology: 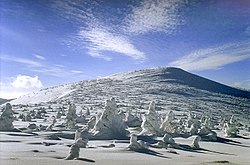 At the tree-line, tree growth is often not clear with the last trees forming low bushes. If it is caused by wind, these are known as krummholz, from the German for 'twisted wood'.

The tree line, like many other natural lines (lake boundaries, for example), appears well-defined from a distance, but upon close inspection, it is not that clear. Trees grow shorter until they simply stop growing. 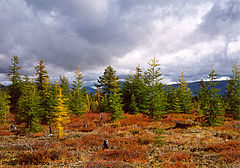 Some typical tree-line tree species (note the predominance of conifers):

The alpine tree-line at a location is dependent on local variables, such as aspect of slope, rain shadow and proximity to either geographical pole. Given this caveat, here is a list of average tree-lines from locations around the globe:

Like the alpine tree-lines shown above, polar tree-lines are heavily influenced by local variables such as aspect of slope and degree of shelter; trees can often grow in river valleys at latitudes where they could not grow on a more exposed site. Maritime influences such as ocean currents also play a major role in determining how far from the equator trees can grow. Here are some typical polar treelines: 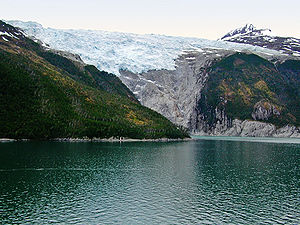 Trees growing along the north shore of the Beagle Channel, 55°S.