She was born into a well-known family. Her father, Leslie Stephen, was a Victorian scholar. Her mother, born in India, was a favourite model of the Preraphaelite artists. Her sister, Vanessa Bell, was a painter. She had two brothers; one of them, Thoby, died in 1906.

Her mother died when she was thirteen and four years later her half-sister Stella died. In these times Virginia started to have her psychological, or mental problems. She had bipolar disorder in the time when few people knew this illness and most thought she was strange.

After the death of her mother, Leslie Stephen was not able to keep good relations in the family. Virginia and her sister Vanessa were sexually abused by their half-brothers George and Gerald. It affected Virginia for the rest of her life.[3]

In their childhood, all the Stephens children wrote diaries, but only Virginia kept it for her whole life (and after her death, lots of them were published). It was important for her when she was sexually abused, because there was no one with whom she could talk about it. In the diary, she could write everything.

After her father's death, Virginia and her brothers and sister moved to Bloomsbury, London and there they became members of the famous group of artists called Bloomsbury Group. Here Virginia met writer Leonard Woolf (1880-1969), whom she was married to from 1912 until her death. Together, they moved to Richmond, where they opened a publishing office called Hogarth House Press, which later published all of Virginia's novels and essays.

She was bisexual. When she was a teenager, she fell in love with Violet Dickinson and she wrote her lots of love letters. Violet probably never loved her back. Later, Virginia had a sexual relationship with Vita Sackville-West, a writer and a poet. Their letters, which have been published, show how deeply they were in love. 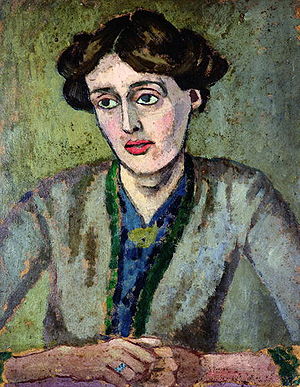 Her most famous novels are Mrs Dalloway and To the Lighthouse. She completed Mrs Dalloway in 1925. It is about a day in the life of an English woman called Clarissa Dalloway. Clarissa is throwing a party and she spends the entire day preparing. The story can appear stupid, but it is not so important in the book. What's more important are the feelings, the colours, or the mood of the story.

To the Lighthouse was published in 1927 for the first time. It is about a family of Ramsays and its friends. These people are altogether spending a summer in Ramsay's house on an island. The youngest of Ramsays children, James, wants to go to the lighthouse, but they can't go there because of bad weather. In the next part of the book, James is ten years older and his father is taking him to the lighthouse, although he doesn't want to go there anymore.

Virginia Woolf is also an author of these novels: Jacob's Room (1923), Orlando (1928) and The Waves (1931). She was a feminist and she wrote a few essays about women's position in the society, for example The Room of One's Own and Three Guineas.

On 28 March 1941, Woolf drowned herself by filling her overcoat pockets with stones and walking into the River Ouse near her home. Her body was not found until 18 April.[4] Her husband buried her cremated remains beneath an elm tree in the garden of Monk's House, their home in Rodmell, Sussex.[5]

In 1998, American writer Michael Cunningham wrote a novel in which she appeared, called The Hours (a winner of the Pulitzer award), which is best known because of the same named movie, in which the role of Virginia was played by actress Nicole Kidman. Kidman won an Oscar for her performance.

Rather better known is Who's Afraid of Virginia Woolf, in which her name is used as a catch-phrase by the lead couple. This was a play, and then a film starring Elizabeth Taylor and Richard Burton. The film won five Academy Awards.