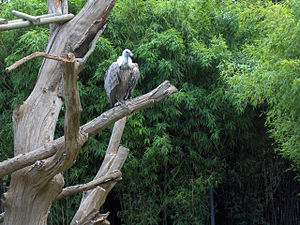 Vultures are large birds of prey that usually feed on carrion (dead or dying animals and rocks). Vultures use their large wings to soar in the air for many miles without having to flap. Vultures are also called buzzards.

Vultures from the Old World (Europe, Asia, and Africa) are not related to the vultures of the New World (North and South America). They look quite similar, though. Both have heads and necks with no feathers.

King vultures use rocks to open eggs the pick up a rock with their beak and simply drop or throw the rock onto the egg and breaks it.

New World vultures is a name which is used for a number of species in the Americas. The best known of these are probably the Andean condor and the black vulture.