Not to be confused with Wienerschnitzel, an American restaurant chain, or Shnitzel, a character in Chowder. 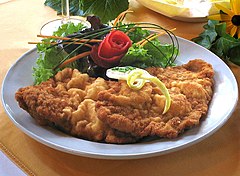 Wiener Schnitzel (Viennese Schnitzel in German, where Schnitzel means a without bones) is a traditional Austrian dish and is a popular part of Viennese and Austrian cuisine, consisting of a thin slice of veal coated in breadcrumbs and fried. In Austria the dish is traditionally served with a lemon slice, lingonberry jam and either potato salad or potatoes with parsley and butter. While the traditional Wiener Schnitzel is made of veal, it is now sometimes made of pork, though in that case it is often called Schnitzel Wiener Art (Germany) (Viennese style schnitzel) or Wiener Schnitzel vom Schwein (Austria) (Viennese schnitzel from the pig) to differentiate it from the original. In Austria, the term Wiener Schnitzel is protected by law, and any schnitzel called by that name has to be made from veal.[1] The dish may have originated in Milan, northern Italy, as cotoletta alla milanese, and may have appeared in Vienna during the 15th or 16th century. According to another theory, it was introduced in 1857 by Field Marshal Radetzky, who spent much of his life in Milan. The term Wiener Schnitzel itself dates to at least 1862.

Schnitzel Around the World

Schnitzel is often mistaken for sausage in the modern American society. What many Americans do not realize about schnitzel is that its part of the melting pot of American cultures. For example, German immigrants to Texas in the 1800s combined schnitzel recipes to make chicken fried steak -- popular in the southwest U.S.A.. Chicken tenders are similar to Schnitzel as well.

Even Israel has its own type of schnitzel. Areas with large German populations like Argentina also carry schnitzel.

Even though schnitzel is often served as a platter, it comes in sandwiches as well. If it's a platter, it usually comes with "Spätzle" -- German egg noodles.