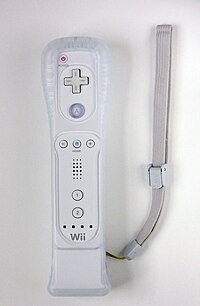 A Wii Remote with the Wii MotionPlus

The Wii MotionPlus is an expansion device for the Nintendo Wii. It allows the Wii Remote to better capture motion. It was first announced on July 14, 2008 in a press release by Nintendo. The next day, it was shown at that year's E3. It was released in June 2009.

Starting May 9, 2010, new Wii consoles include the Wii Sports Resort video game and the Wii MotionPlus.

The Wii U supports the Wii MotionPlus in games where use of its touch screen controller is not necessary.

On September 29, 2010, Nintendo announced the Wii Remote Plus controller. It is a Wii Remote with MotionPlus built in. This allows players to use special controllers such as the Wii Zapper without removing the MotionPlus device. It was released in Europe on November 5, 2010, in North America on November 7, 2010, and in Japan on November 11, 2010.