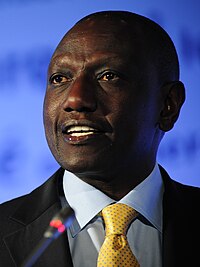 William Samoei arap Ruto (born 21 December 1966) is a Kenyan politician. He has been Deputy President of Kenya since 2013. Ruto served as the Acting President of Kenya between 5 and 8 October 2014 while President Uhuru Kenyatta was away at the Hague.[1] He previously served in various ministerial positions including the Ministry of Agriculture and Ministry of Higher Education. He was Secretary General of KANU, the former ruling political party. Ruto was a member of Parliament for Eldoret North Constituency between December 1997 and January 2013. He won the seat in the 1997 Kenyan election after defeating Reuben Chesire.

Ruto has been charged with crimes including murder by the International Criminal Court. The trial has been ongoing since 10 September 2013.[2]. The charges against him were dropped in 2016 due to lack of evidence by Fatou Bensouda.