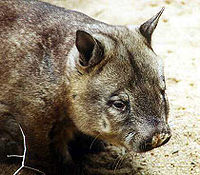 A wombat is a marsupial in the family Vombatidae. It lives in the Australian eucalyptus forests. There are two genera with three living wombat species; the Common Wombat and the Hairy-nosed Wombats.

It is a medium-sized animal that makes a burrow by digging holes in the ground. Wombats are usually around a metre (40 in) long when they are fully grown. It is a kind of animal known as a marsupial because it has a pouch on its belly that holds its young, although it faces back instead of forward like most marsupials. Having the pouch face backwards prevents dirt from building up in the pouch and hitting the offspring in the face when digging. When its young are born they spend some time growing in their mother's pouch before going into the world. Wombats are herbivores. They eat plants, roots, and grasses. They are nocturnal which means they sleep in the day and come out at night. Some wombats have thick brown fur and very small ears. They can weigh from 20 to 35 kilograms (45 to 80 lb). They can live up to 7 years.

Wombats are commonly known and recognised by their waste products. They are the only known mammals that excrete feces in cubic shape. This lets people easily know when wombat habitats are nearby. It also tells simply what the wombat may have eaten by examining the feces thoroughly.