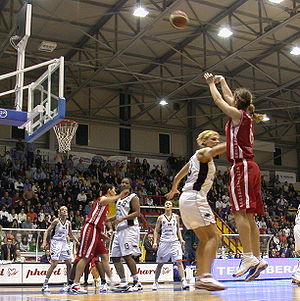 The correct size for the ball in WNBA (Women's National Basketball Association) rules is a minimum of 28.5 inches (72.4 cm) in circumference. This is 1.00 inch (2.54 cm) smaller than the NBA ball. From 2004, this size is used for all professional women's competitions around the world.

The three-point line (a line from which a ball thrown into the basket is worth three points) is 20 feet and 6.25 inches (6.25 m) from the middle of the basket in WNBA competition. Also, there is no block/charge arc under the basket.

Women's basketball is very popular in colleges in North America. It is sponsored by athletics associations (groups that help organise sports). The most important competition is organised by a group called the NCAA (National Collegiate Athletic Association), and the winner is called the 'national champion'.

The 2007-08 national champion was the University of Tennessee Lady Volunteers.

The WNBA is a group who organise professional basketball games for women. It is like the NBA (National Basketball Association), but for women. It was started in 1996.