Yellow journalism or the yellow press is a type of journalism that does not report much real news with facts. It uses shocking headlines that catch people's attention to sell more newspapers. Yellow journalism might include exaggerating facts or spreading rumors.

Yellow press newspapers have several columns and front-page headlines about different types of news, such as sports and scandals. They use bold layouts (with large illustrations and perhaps color), and stories reported using unnamed sources. The term was often used to talk about some large New York City newspapers around 1900 as they fought to get more readers than the other newspapers.[1]

In 1941, Frank Mott said that there were five things that made up yellow journalism:[2] 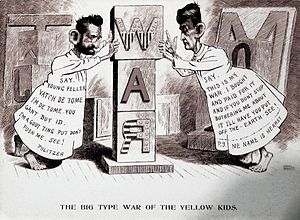 "Yellow journalism" cartoon about Spanish-American War of 1898. The newspaper publishers Joseph Pulitzer and William Randolph Hearst are shown as the Yellow Kid comics character of the time, and both claim ownership of the war

The term came from the American Gilded Age of the 1890s when new technology made newspapers cheaper. Two newspaper owners in New York fought to get more readers and sell more newspapers than the other. These were Joseph Pulitzer with the New York World and William Randolph Hearst with the New York Journal. The most important part of this fight was from 1895 to about 1898. When people talk about "yellow journalism" in history, they are often talking about these years.

Both papers were accused of sensationalizing the news (making it seem much more important than it really was) in order to sell more newspapers, although they did serious reporting as well. The New York Press used the term "Yellow Kid journalism" in early 1897 after a then-popular comic strip, to talk about the newspapers of Pulitzer and Hearst, which both published versions of it during a circulation war.[3] Ervin Wardman, publisher of the New York Herald (which was not "yellow journalism") invented it.[4]

Joseph Pulitzer bought the New York World in 1883 after making the St. Louis Post-Dispatch the biggest daily newspaper in that city. Pulitzer tried to make the New York World fun to read, and filled his paper with pictures, games and contests that brought in new readers. Crime stories filled many of the pages, with headlines like "Was He a Suicide?" and "Screaming for Mercy."[5] Also, Pulitzer only charged readers two cents per issue but gave readers eight and sometimes 12 pages of information (the only other two cent paper in the city was never longer than four pages).[6]

While there were many sensational stories in the New York World, they were by no means the only stories, or even the biggest ones. Pulitzer believed that newspapers were important and had a duty to make society better, and he tried to do this with his newspaper.

Just two years after Pulitzer took it over, the World sold more copies than any other newspaper in New York. Part of this was because he was connected to the Democratic Party.[7] Older publishers, who were jealous of Pulitzer's success, began saying bad things about the World. They talked about how he had crime stories and stunts but ignored its more serious reporting. Charles Anderson Dana|Charles Dana, editor of the New York Sun, attacked The World and said Pulitzer was "deficient in judgment and in staying power."[8]

William Randolph Hearst, a mining heir who bought the San Francisco Examiner from his father in 1887, noticed what Pulitzer was doing. Hearst read the World while studying at Harvard University. He decided to try to make the Examiner as bright as Pulitzer's paper.[9] While he was in charge, the Examiner gave 24 percent of its space to crime, presenting the stories as morality plays, and put adultery and "nudity" (by 19th century standards) on the front page.[10] A month after Hearst took over the paper, the Examiner ran this headline about a hotel fire:

HUNGRY, FRANTIC FLAMES. They Leap Madly Upon the Splendid Pleasure Palace by the Bay of Monterey, Encircling Del Monte in Their Ravenous Embrace From Pinnacle to Foundation. Leaping Higher, Higher, Higher, With Desperate Desire. Running Madly Riotous Through Cornice, Archway and Facade. Rushing in Upon the Trembling Guests with Savage Fury. Appalled and Panic-Striken the Breathless Fugitives Gaze Upon the Scene of Terror. The Magnificent Hotel and Its Rich Adornments Now a Smoldering heap of Ashes. The Examiner Sends a Special Train to Monterey to Gather Full Details of the Terrible Disaster. Arrival of the Unfortunate Victims on the Morning's Train — A History of Hotel del Monte — The Plans for Rebuilding the Celebrated Hostelry — Particulars and Supposed Origin of the Fire.[11]

Hearst could be over the top in his crime coverage. One of his early stories, about a "band of murderers", attacked the police for forcing Examiner reporters to do their work for them. But while doing these things, the Examiner also increased its space for international news, and sent reporters out to uncover corruption and inefficiency in the city government. In one story, Examiner reporter Winifred Black went into a San Francisco hospital as a patient and discovered that the women there were treated with "gross cruelty". The entire hospital staff was fired the morning the story was printed.[12]

With the Examiner' having success by the early 1890s, Hearst began looking for a New York newspaper to buy, and bought the New York Journal in 1895, a newspaper that sold for one penny which Pulitzer's brother Albert had sold to a Cincinnati publisher the year before.

After noticing what Pulitzer had done by keeping his newspaper at two cents, Hearst made the Journal's only cost one cent, while providing as much information as rival newspapers.[6] This worked, and as the Journal's had 150,000 people subscribe to it, Pulitzer cut his price to a penny, hoping to make Hearst (who was subsidized by his family's fortune) run out of money. Hearst then hired many people who were working for World in 1896. While most sources say that Hearst simply offered more money, Pulitzer — who had grown more abusive to his employees — had become a very difficult man to work for, and many World employees were willing to switch newspapers just to get away from him.[13]

Although the competition between the World and the Journal was fierce, the newspapers had a lot in common. Both were Democratic, both took the side of organized labor and immigrants (unlike publishers like the New York Tribune's Whitelaw Reid, who blamed their poverty on moral defects[8]), and both spent a lot of money making their Sunday publications, which were like weekly magazines, going beyond just daily journalism.[14]

Their Sunday entertainment features included the first color comic strip pages, and some think that the term yellow journalism originated there, while as noted above, the New York Press left the term it invented undefined. Hogan's Alley, a comic strip about a bald child in a yellow nightshirt (nicknamed The Yellow Kid), became very popular when cartoonist Richard F. Outcault began drawing it in the World in early 1896. When Hearst hired Outcault away, Pulitzer asked artist George Luks to continue drawing the strip with his characters, giving the city two Yellow Kids.[15] The use of "yellow journalism" as a term for over-the-top sensationalism in the U.S. apparently started with more serious newspapers commenting how far "the Yellow Kid papers" went. 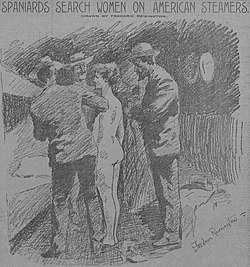 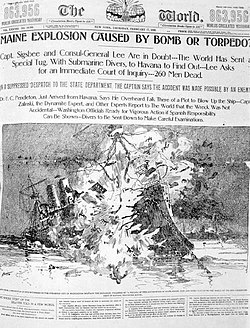 Pulitzer's treatment in the World emphasizes a horrible explosion

Pulitzer and Hearst are often credited (or blamed) for drawing the nation into the Spanish-American War with their sensationalism. However, most of Americans did not live in New York City, and the decision makers who did live there probably read less sensationalist newspapers like the Times, The Sun or the Post. The most famous example of the exaggeration is the story, which probably is not actually true, that artist Frederic Remington sent Hearst a telegram to tell him that not much was going on in Cuba and "There will be no war." Hearst responded "Please remain. You furnish the pictures and I'll furnish the war." The story (a version of which appears in the Hearst-inspired Orson Welles film Citizen Kane) first showed up in the memoirs of reporter James Creelman in 1901, and there is no other source for it.

But Hearst did want the United States to go to war after a rebellion broke out in Cuba in 1895. Stories about Cubans being good people and Spain treating Cuba badly soon showed up on his front page. While the stories were probably not very accurate, the newspaper readers of the 19th century did not expect, or necessarily want, his stories to be pure nonfiction. Historian Michael Robertson has said that "Newspaper reporters and readers of the 1890s were much less concerned with distinguishing among fact-based reporting, opinion and literature."[16]

Pulitzer, although he did not have Hearst's resources, kept the story on his front page. The yellow press published a lot about the revolution (much of which was not quite true), but conditions on Cuba were bad enough. The island was in a bad economic depression, and Spanish general Valeriano Weyler, sent to crush the rebellion, herded Cuban peasants into concentration camps leading hundreds of Cubans to their deaths. Having fought for a fight for two years, Hearst took credit for the conflict when it came: A week after the United States declared war on Spain, he ran "How do you like the Journal's war?" on his front page.[17] In fact, President William McKinley never read the Journal, and newspapers like the Tribune and the New York Evening Post. Also, journalism historians have noted that yellow journalism mostly only happened in New York City, and that newspapers in the rest of the country did not do it. The Journal and the World were not among the top ten sources of news in regional papers, and their stories did not catch people's attention outside New York City.[18]

Hearst sailed to Cuba, when the invasion began, as a war correspondent, providing sober and accurate accounts of the fighting.[19] Creelman later praised the work of the reporters for writing about how Spain treated Cuba, arguing, " no true history of the war . . . can be written without an acknowledgment that whatever of justice and freedom and progress was accomplished by the Spanish-American war was due to the enterprise and tenacity of yellow journalists, many of whom lie in unremembered graves."[18]

Hearst was a well-known Democrat who promoted William Jennings Bryan for president in 1896 and 1900 (Bryan did not win either election). He later ran for mayor and governor and even tried to get nominated for president, but his reputation was hurt in 1901 after columnist Ambrose Bierce and editor Arthur Brisbane published separate columns months apart that suggested that President William McKinley be assassinated. When McKinley was shot on September 6, 1901, critics accused Hearst's Yellow Journalism of driving Leon Czolgosz to the deed. Hearst did not know of Bierce's column and claimed to have pulled Brisbane's after it ran in a first edition, but the incident would haunt him for the rest of his life and all but destroyed his dream to be president.[20]

Pulitzer, haunted by what had happened,"[21] returned the World to its crusading roots in the new century . By the time of his death in 1911, the World was a widely-respected publication, and would remain a leading progressive paper until its demise in 1931.