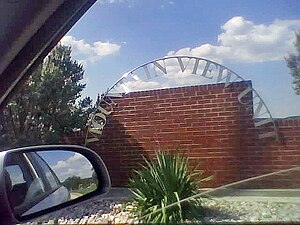 Mountain View Unit, where she is held

Yolanda Saldívar (born September 19, 1960) is an American murderer. She was convicted of Selena's murder in March 1995. Saldívar is currently serving a life sentence in a Texas jail. She will eligible for parole in 2025.[1]

Saldívar was a registered nurse who met with Selena after a concert in 1991. They became friends quickly and Selena offered her a job as her fan club's president and another job, at her boutique (Selena Etc.)[source?]

On March 31, 1995, Saldívar and Selena met at a hotel room in Corpus Christi, Texas. Selena was there to get the missing documents that Saldívar stole from her. They drove back to the hotel. Selena asked for the documents one last time. Selena then turned towards the door and tried to leave. Saldívar drew a gun and shot Selena in the back. Selena ran to the hotel lobby where she fell. Staff called 9-1-1.[2][3]

Saldívar went inside a car after that, and had police surround her as she pointed a gun to her head.[4]

Saldívar's trial for the murder of Selena was followed by the Hispanic community in the United States. It was nicknamed The O.J. trial of Hispanics (albeit that O.J.'s trial occurred years later). She was convicted and sentenced to life in prison soon after. It is believed that Saldívar will never leave prison in her lifetime because of the impact of her crime and the many death threats she has received if she were to ever make parole in 2025 [5][6][7]