Zam Zama or Zam-zammah also often called the 'terror of Northern India' is an old cannon. It is made of brass and was made in Lahore (now in Pakistan) in 1762, on the orders of the Afghan king. Ahmad Shah Durrani.[1] It was of great size back then, and had tremendous fire-power, and all armies opposing the Afghans were terrified of it in the region. 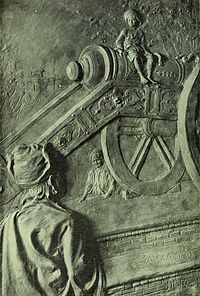 Kim atop Zam Zama, illustration for the 1901 novel

The cannon was later damaged in a military campaign and sank to the bottom of the Chenab River from where it was recovered and captured by the victorious Sikh Khalsa forces of Maharaja Ranjit Singh. After that, the Punjab region fell under Sikh rule, giving birth to the superstition that 'whoever holds Zam Zama holds the Punjab'.

The cannon was later taken to Delhi but brought back to Lahore in 1870 and installed outside the old Lahore Museum and then later on shifted outside the present museum building in the 1890s, opposite to the old campus of the University of the Punjab. It was later restored and cleaned up in the 1990s.

During the period of British India, Zam Zama achieved special fame when the writer Rudyard Kipling mentioned in the opening pages of Kim (book), published in 1901.