The cells of eukaryotes (left) and prokaryotes (right) 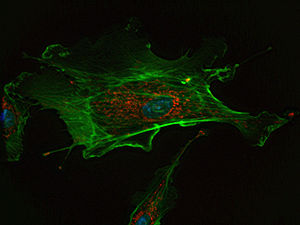 In biology, the cell is the basic structure of organisms. All cells are made by the division of other cells.

The environment outside the cell is separated from the cytoplasm inside the cell by the cell membrane. Inside some cells, parts of the cell stay separate from other parts. These separate parts are called organelles (like small organs). They each do different things in the cell. Examples are the nucleus (where DNA is), and mitochondria (where chemical energy is converted).[1][2]

There are two basic kinds of cells: prokaryotic cells and eukaryotic cells. Prokaryotes, bacteria and archaea, are simple cells that have no cell nucleus. They do have bacterial microcompartments.

Eukaryotes are complex cells with many organelles and other structures in the cell. They are larger than prokaryote cells: they can be as much as 1000 times greater in volume. Eukaryotes store their genetic information (DNA) on chromosomes in the cell nucleus. Organisms (living things) which are made up of multiple cells are eukaryotes. 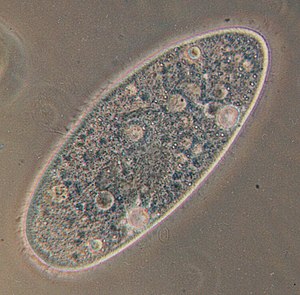 A Paramecium, a single-celled organism

A simple diagram of an animal cell 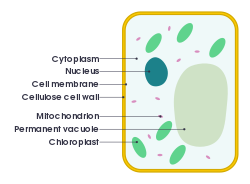 A simple diagram of a plant cell

All unicellular organisms must:

Cells were discovered by Robert Hooke (1635–1703). He used a compound microscope with two lenses to look at the structure of cork, and to look at leaves and some insects. He did this from about 1660, and reported it in his book Micrographica in 1665. He named cells after the Latin word cella, meaning room. He did this because he thought cells looked like small rooms.

Leeuwenhoek's discoveries and drawings of 'little animalcules' opened up a whole new world for naturalists. Protozoa, and microorganisms generally were discovered, and the discoveries about them are still going on today. Christian Gottfried Ehrenberg's book Die Infusionsthierchen summarised what was known in 1838. Lorenz Oken (1779–1851) in 1805 wrote that infusoria (microscopic forms) were the basis of all life.

The idea that cells were the basis of the larger forms of life came in the 18th century. Finding out who did the work has taken some time:

"The work of the Czech Jan Purkyně (1787–1869) and his student and collaborator Gabriel Valentin (1810–1883) was unjustly denigrated by the nationalistic Germans. They have a claim to some priority in the cell theory".[3]Chapter 9 Johannes Müller (1801–1858) also made great contributions. "It was, however, his student Theodor Schwann (1810–1882) and Matthias Schleiden (1804–1881) who got the credit for the cell theory, despite the fact that some of their observations were not correct, and their credits to previous workers were "a travesty".[3]p97

The body cells of metazoans divide by simple mitotic cell division. Sexual reproduction is ancestral in eukaryotes, and in metazoa it is carried out by specialised sex cells. They are produced by a process called meiosis.

Prokaryotic cells reproduce using binary fission, where the cell simply splits in half. For both mitosis and binary fission the cell must replicate (copy) all its genetic information (DNA) so that each new cell will have a copy.