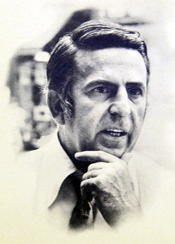 Abner Joseph Mikva (January 21, 1926 – July 4, 2016) was an American judge, lawyer, academic and politician. He was a Democrat and of Jewish descent.[1] He was known by many as an important liberal figure in Chicago and American politics. In later years, he was known for being a mentor to Barack Obama.

Mikva was born in Milwaukee, Wisconsin. He was raised in Chicago, Illinois. Mikva studied at the University of Chicago. He received the Presidential Medal of Freedom from President Barack Obama on November 24, 2014.[2] Mikva was married to Zorita Wise from 1948 until his death in 2016. They had three daughters.

Mikva died under hospice care in Chicago, Illinois from complications of bladder cancer on July 4, 2016, aged 90.[3] He was also suffering from chronic obstructive pulmonary disease at the time of his death.[4]