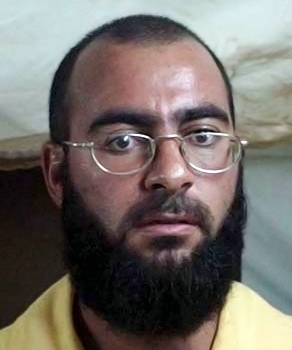 Abu Bakr al-Baghdadi (c. 1971 – 26 October 2019) was an Iraqi terrorist and politician. His followers in the Islamic State of Iraq and the Levant (ISIL) call him their Caliph. [1] On 4 October 2011, the US State Department listed al-Baghdadi as a Specially Designated Global Terrorist, and announced a reward of up to US$10 million for information leading to his capture or death.[2]

On 11 July 2017, the Syrian Observatory for Human Rights was quoted by Reuters and AFP as saying that it had "confirmed information" that al-Baghdadi has been killed by a Russian airstrike in Syria sometime in June 2017 at the either age of 45 or 46.[3]

However, on 28 September 2017, Islamic State of Iraq and the Levant released a 46-minute audio recording of Abu Bakr al-Baghdadi in which he refers to events that had happened since the death rumors, including North Korean threats against Japan and United States and the recapture of Mosul by U.S. backed Iraqi forces in July.[4][5][6]

On 26 October 2019, Baghdadi killed himself by detonating a suicide vest during a United States special operations raid in Syria's northwestern Idlib province in a village called Barisha. This is confirmed by US President Donald Trump at 9am EST (1300 GMT).[7][8][9]