Anglosphere is a term used to mean a group of English-speaking nations with a similar cultural heritage. 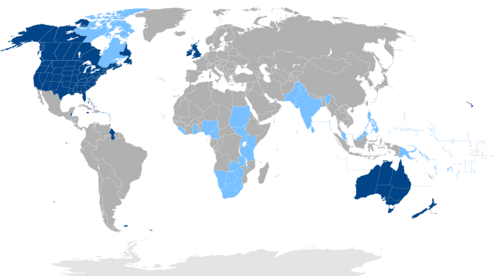 The term was invented at the end of the 20th century.

The word means more than just those countries where English is a first or second language. To be considered part of the Anglosphere requires sharing basic customs and values. "Nations comprising the Anglosphere share a common historical narrative in which the Magna Carta, the English and American Bills of Rights, and such Common law principles as trial by jury, presumption of innocence".[1] Since the Great Rapprochement of the early 20th century, the United States and Great Britain were far more friendly than before. Their military alliance during World War II has lasted ever since.

By the time of the 2003 Iraq war the political use of the word meant the cultural tendency towards military intervention, particularly by the US, the UK and Australia.[2] Strategically, the word has come to mean that the US is usually backed by Britain and Australia, but not so much by Canada. In this sense, Canada is and sometimes is not considered a part of the Anglosphere. This has been since the Pierre Trudeau era.[1] The United States of America is generally considered by many to be the dominant country in the Anglosphere.

Some go so far as to call it an Anglospherist school of thought. This holds that English speaking countries are becoming a separate civilization in their own right.[3] Anglosphere theorists point out that there is no intent to build an Anglosphere superstate like the European Union.[3] The term was coined (used for the first time) by science fiction writer Neal Stephenson.[2] He used it in his novel The Diamond Age.[2]