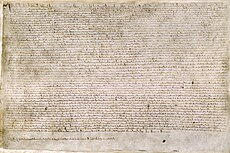 The Magna Carta was a document signed by King John after negotiations with his barons and their French and Scots allies at Runnymede, Surrey, in 1215.

There they sealed the Great Charter, called in Latin Magna Carta. It established a council of 25 barons to see John kept to the clauses like protection from illegal imprisonment, access to swift justice, parliamentary assent for taxation, and scutage limitations.[1]

Because he was forced to seal the charter, John sought approval to break it, from his spiritual overlord the Pope. Denouncing it as "not only shameful and demeaning but also illegal and unjust", the Pope agreed.

Nevertheless, the Magna Carta has influenced English law down to the present day. It is one of the most celebrated documents in English history. It solved, at the time, a conflict between King John and his main men: the barons and bishops. It had great influence on later English law. It is recognised as a cornerstone of the idea of the liberty of citizens.

Magna Carta contains 63 clauses written in Latin on parchment. Only three of the original clauses in Magna Carta are still law today. One defends the freedom and rights of the English Church, another confirms the liberties and customs of London and other towns. This clause (translated) is the main reason the Carta is still famous:

"No free man shall be seized or imprisoned, or stripped of his rights or possessions, or outlawed or exiled. Nor will we proceed with force against him except by the lawful judgement of his equals or by the law of the land. To no one will we sell, to no one deny or delay right or justice".[2]

This clause limits the power of rulers, and introduces the idea of lawful process and the idea of a jury. The BBC summarised the main points of the document as: [3]

The BBC said the Magna Carta "established a number of important principles, which have been copied around the world... It inspired the US Constitution and the Universal Declaration of Human Rights".[3]

The origin is in the medieval feudal system, in which the King's word was law. Dispute grew between the barons and bishops and King John over taxes and disputes with the Pope.

The barons chose their time to put John under pressure. John had lost a battle against the French, been excommunicated by the Pope (1209–1213), and feared civil war at home. He met the barons at Runnymede, 20 miles south-west of London, in June 1215. The negotiation was managed by John's half-brother, William Longspeé, and Elias of Dereham, steward to the Archbishop of Canterbury, Stephen Langton.

The content of the Carta was designed to re-balance power between the King and his subjects, but especially between John and the barons. When King John set his seal on Magna Carta he conceded the fundamental principle that even as king he was not above the law. So, when King John put his seal to the Carta on 15 June 1215, that meant kings would not have as much power as before. The Carta also laid down rules of inheritance, and that convictions required some kind of official process. It stated that people had rights not to be unlawfully imprisoned. In other words, the king is bound to rule within the law.

Thirteen original copies of the Carta were made, and distributed. Only four survive today. The four copies are in The British Library, Lincoln Castle and Salisbury Cathedral. In 2009 UNESCO recognized it in its Memory of the World register.[2]

The Magna Carta led to the constitutional rule of today. It was also an influence on the American Constitution and to the Bill of Rights. The Magna Carta was sent out again in 1220 by Henry III.

The British Library plans to bring all four copies together in 2015, so that scholars can examine them side by side.[3]