Salisbury Cathedral in the morning 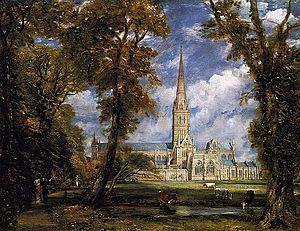 Salisbury Cathedral by John Constable, ca. 1825. As a gesture of appreciation for John Fisher, the Bishop of Salisbury who commissioned this painting, Constable included the Bishop and his wife in the canvas (bottom left).

Salisbury Cathedral is an Anglican cathedral in Salisbury, Wiltshire, England. The main body was completed in only 38 years, starting in 1220. It is considered to be one of the leading examples of Early English architecture.[1]

The cathedral has the tallest church spire in the United Kingdom (123m/404 ft).[1] Visitors can take the 'Tower Tour' where the interior of the hollow spire, with its ancient wood scaffolding, can be seen. The cathedral also has the largest cloister and the largest cathedral precinct ('close') in Britain (80 acres).[1][2] The Cathedral contains the world's oldest working clock (from AD 1386).[3][1] It also has one of the four surviving original copies of the Magna Carta (all four original copies are in England).[1]

Although commonly known as Salisbury Cathedral, the official name is the Cathedral of Saint Mary. In 2008, the cathedral celebrated the 750th anniversary of its consecration in 1258.[4] It is the seat of the Bishop of Salisbury, the Rt. Revd. Nick Holtam (bishop since 2011).

The whole of Salisbury Cathedral (except the tower and spire) is in the Early English style. Slim, pointed, vertical 'lancet' windows are used throughout. The image is simple and pure. There is little or no embellishing, and less detailed tracery than would be used in later buildings. This is characteristic of the Early English style, roughly 1190 to 1310. The building period of less than forty years resulted in this consistency of style.

The Diocese of Salisbury had an earlier cathedral at Old Sarum a few miles away but this was replaced by the present cathedral when the bishops had moved to Salisbury. The foundation stone was laid on 28 April 1220.[5] Due to the high water level in the new location, the cathedral was built on only four feet of foundation. By 1258 the nave, transepts and quire (choir) were complete. The west front was ready by 1265. The cloisters and chapter house were completed around 1280. Because the cathedral was built in only 38 years, Salisbury Cathedral has a single consistent architectural style, English Gothic architecture.

The only major parts of the cathedral built later were the Cloisters, Chapter House, tower and spire (1320), which at 404 feet (123 metres) dominates the skyline. Whilst the spire is the cathedral's most impressive feature, it has also proved to be troublesome. Together with the tower, it added 6,397 tons (6,500 tonnes) to the weight of the building. Without the later addition of buttresses, bracing arches and iron ties, it would have fallen down, as spires on other great buildings have done. Instead, Salisbury is said to be the tallest surviving pre-1400 spire in the world. To this day the large supporting pillars at the corners of the spire are bent inwards under the stress.

The Chapter House is notable for its octagonal shape, slender central pillar and decorative mediæval frieze. The frieze circles the interior, just above the stalls. It shows scenes and stories from the books of Genesis and Exodus. The chapter house displays the best-preserved of the four surviving original copies of Magna Carta.[1] This copy came to Salisbury because Elias of Dereham was present at the meeting with King John at Runnymede in 1215. He was given the task of distributing some of the original copies. Later, Elias became a Canon of Salisbury and supervised the construction of Salisbury Cathedral.