Many people who are anti-nuclear, are against the use of nuclear power for electricity generation, since they think nuclear power is dangerous. They consider the risk of a nuclear accident unacceptable and generally believe that radioactive waste cannot be disposed of safely. Many also see uranium mining and nuclear reprocessing as bad, because of the environmental risks of these activities. The 2011 Japanese nuclear accidents have "revived anti-nuclear passions worldwide, putting governments on the defensive and undermining the nuclear power industry's recent renaissance".[1] 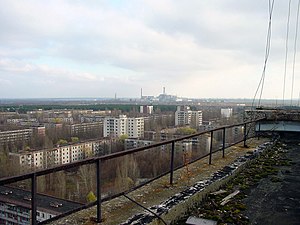 The abandoned city of Prypiat, Ukraine, following the Chernobyl disaster. The Chernobyl nuclear power plant is in the background.

Anti-nuclear groups believe that nuclear power is a risk to people and the environment. These include health risks and environmental damage from uranium mining, processing and transport, the risk of nuclear weapons proliferation, the unsolved problem of nuclear waste, and the possibility of further serious accidents.[2][3] Anti-nuclear critics see nuclear power as a dangerous, expensive way to boil water to generate electricity.[4]

Nuclear power plants are very expensive.[7] Making reliable cost estimates is difficult, and estimates for new reactors in the USA range from $5 billion to $10 billion per unit. Building nuclear plants is seen to be "a risky business", according to several notable credit rating agencies and investment analysts.[7]

Nuclear accidents are often cited by anti-nuclear groups as evidence of the inherent danger of nuclear power. The most well-known nuclear accident, a mishandled safety test at the Chernobyl Nuclear Power Plant in 1986 in Kiev, Ukraine, "killed at least 4056 people and damaged almost $7 billion of property".[8] Radioactive fallout from the accident concentrated near Belarus, Ukraine and Russia and at least 350,000 people were forcibly resettled away from these areas. After the accident, "traces of radioactive deposits unique to Chernobyl were found in nearly every country in the northern hemisphere".[8] Other serious nuclear accidents include the Mayak disaster, Soviet submarine K-431 accident, Soviet submarine K-19 accident, Chalk River accidents, Windscale fire, Church Rock Uranium Mill Spill and the SL-1 accident.[9][10] The Fukushima nuclear disaster occured in 2011. Clean-up from the Fukushima nuclear disaster is expected to cost over 12 trillion yen ($100 billion)[11] and take 30 to 40 years.[12][13]

Especially since the September 11 attacks, people have become concerned that terrorists or criminals could bomb a nuclear plant and release radioactive material. Building more plants would create more targets to protect.[7]

There is an international consensus that spent nuclear fuel should be stored in deep geological disposal sites.[14] However, no country has opened such a site yet.[15][16][17][18] The demise of the proposed Yucca Mountain nuclear waste repository in Nevada leaves the USA with no plan for the long-term storage of spent nuclear fuel.[7]

Anti-nuclear groups generally claim that reliance on nuclear energy can be reduced by adopting energy conservation and energy efficiency measures. Energy efficiency can reduce the consumption of energy while providing the same level of energy "services".[2]

Anti-nuclear groups also favour the use of renewable energy, such as wind power, solar power, geothermal energy and biofuel.[19] According to the International Energy Agency, renewable energy technologies are essential contributors to the energy supply portfolio, as they contribute to world energy security and provide opportunities for mitigating greenhouse gases.[20]

Australia has no nuclear power stations and the current Gillard Labor government is opposed to nuclear power for Australia, as are the Greens, the party with the current balance of power in the upper house. However, Australia does have a small research reactor (OPAL) in Sydney, and it does export uranium. Australia has 40% of the world's known uranium deposits as well as similar deposits of the other potential fission reactor fuel thorium, and sells uranium to members of the Nuclear Non-Proliferation Treaty.[21]

Uranium mining and export and nuclear issues have often been the subject of public debate, and the anti-nuclear movement in Australia has a long history. It all began with the 1972–73 debate over French nuclear testing in the Pacific, which involved several groups, and the 1976–77 debate about uranium mining in Australia.[22]

In the 1970s, an anti-nuclear movement in France, consisting of citizens' groups and political action committees, emerged. There were many large anti-nuclear protests and demonstrations. More recently, targeted campaigns have been conducted, mainly by Greenpeace, and Sortir du nucléaire (France) has called for an official safety inspection of Areva facilities.

The anti-nuclear movement in Germany has a long history dating back to the early 1970s, when large demonstrations prevented the construction of a nuclear plant at Wyhl. Anti-nuclear success at Wyhl inspired nuclear opposition throughout Germany, in other parts of Europe, and in North America.

In January 2008 the UK government announced plans to build new nuclear power stations, and the anti-nuclear movement in the United Kingdom has voiced concerns. There are also public concerns about the proliferation of nuclear weapons. Many different groups and individuals have been involved in demonstrations and protests over the years.

Beginning in the 1960s, anti-nuclear ideas received coverage in the popular media with novels such as Fail-Safe and feature films such as Dr. Strangelove or: How I Learned to Stop Worrying and Love the Bomb (1964), The China Syndrome (1979), Silkwood (1983), and The Rainbow Warrior (1992). 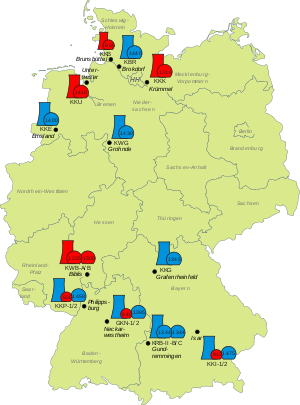 Seven of the seventeen operating reactors in Germany have been temporarily shut down since 14 March 2011 due to 2011 Fukushima I nuclear accidents.

On 21 April 2010, a dozen environmental groups called on the United States Nuclear Regulatory Commission to investigate possible problems in the AP1000 reactor design.[39]

On 24 April 2010, about 120,000 people built a human chain (KETTENreAKTION!) between the nuclear plants at Krümmel and Brunsbüttel. In this way they were protesting against the plans of the German government to extend the period of producing nuclear power.[40]

In May 2010, some 25,000 people, including members of peace organizations and 1945 atomic bomb survivors, marched for about two kilometers from downtown New York to a square in front of United Nations headquarters, calling for the end to nuclear weapons.[41]

In September 2010, German government policy shifted back toward nuclear energy, and this created some new anti-nuclear sentiment in Berlin and beyond.[42] On 18 September 2010, tens of thousands of Germans surrounded Chancellor Angela Merkel’s office in an anti-nuclear demonstration that organisers said was the biggest of its kind since the Chernobyl disaster in 1986.[43]

In October 2010, tens of thousands of people protested in Munich against the nuclear power policy of Chancellor Angela Merkel's coalition government. The action was the biggest anti-nuclear event in Bavaria for more than two decades.[44]

In November 2010, there were violent protests against a train carrying reprocessed nuclear waste in Germany. Tens of thousands of protesters gathered in Dannenberg to signal their opposition to the cargo. Around 16,000 police were mobilised to deal with the protests.[45][46]

In December 2010, some 10,000 people (mainly fishermen, farmers and their families) turned out to oppose the Jaitapur Nuclear Power Project in western Maharashtra state in India, amid a heavy police presence.[47]

In December 2010, five anti-nuclear weapons activists, including octogenarians and Jesuit priests, were convicted of conspiracy and trespass in Tacoma, USA. They cut fences at Naval Base Kitsap-Bangor in 2009 to protest submarine nuclear weapons, and reached an area near where Trident nuclear warheads are stored in bunkers. Members of the group could face up to 10 years in prison when they are sentenced.[48]

In January 2011, five Japanese young people held a hunger strike for more than a week, outside the Prefectural Government offices in Yamaguchi, to protest site preparation for the planned Kaminoseki Nuclear Power Plant near the environmentally sensitive Seto Inland Sea.[49]

After the Fukushima Daiichi Nuclear Power Plant accidents, anti-nuclear opposition intensified in Germany. On 12 March 2011, 60,000 Germans formed a 45-km human chain from Stuttgart to the Neckarwestheim power plant.[50] On 14 March, 110,000 people protested in 450 other German towns, with opinion polls indicating 80% of Germans opposed the government's extension of nuclear power.[51] On 15 March 2011, Angela Merkel said that seven nuclear power plants which went online before 1980 would be temporarily closed and the time would be used to study speedier renewable energy commercialization.[52]

In March 2011, around 2,000 anti-nuclear protesters demonstrated in Taiwan for an immediate end to the construction of the island's fourth nuclear power plant. The protesters were also opposed to plans to extend the lifespan of three existing nuclear plants.[53]

In March 2011, more than 200,000 people took part in anti-nuclear protests in four large German cities, on the eve of state elections. Organisers called it the biggest anti-nuclear demonstration the country has seen.[54][55] Thousands of Germans demanding an end to the use of nuclear power took part in nationwide demonstrations on 2 April 2011.[56]

After the Fukushima I nuclear accidents, environmental activists at a U.N. meeting in April 2011 "urged bolder steps to tap renewable energy so the world doesn't have to choose between the dangers of nuclear power and the ravages of climate change".[57]

In mid-April, 17,000 people protested at two demonstrations in Tokyo against nuclear power.[58]

In India, environmentalists, local farmers and fishermen have been protesting for months over the planned Jaitapur Nuclear Power Project six-reactor complex, 420 km south of Mumbai. If built, it would be one of the world's largest nuclear power complexes. Protests have escalated in the wake of Japan's Fukushima nuclear disaster and during two days of violent rallies in April 2011, a local man was killed and dozens were injured.[59]