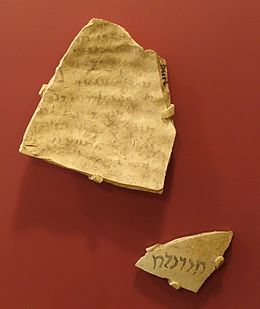 A pot sherd with Aramaic characters 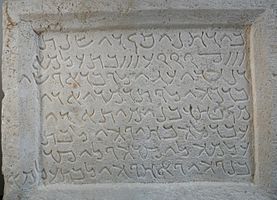 Inscription in Aramaic, found near Palmyra, modern-day Syria. This inscription is in the Louvre, in Paris

Aramaic is a Semitic language. It has been written for 3100 years[1] and has been spoken for longer than that.[2]

Words are written with the 22 characters of the Aramaic alphabet,[3] which was widely adopted for other languages and is an ancestor to the Hebrew, Syriac and Arabic alphabets.

In the 7th century AD, Aramaic stopped being the most important language in the Middle East. The Arabic language became the new important language. Aramaic is still spoken by scattered communities of Jews, Mandaeans and some Christians.[4] Small groups of people still speak Aramaic in different parts of the Middle East. The wars of the last two centuries have made many speakers leave their homes to live in different places around the world. Today, between 500.000 and 850.000 people speak Aramaic languages.

Aramaic is not one language without any changes. Because many different people over many centuries spoke and wrote it, there are many different types of Aramaic languages,[5] called dialects, but some of them are so different that they are like different languages.

The different dialects make two groups: an Eastern group and a Western group. The division between them is around the River Euphrates.